The most visible sign of the research carried out by the Astrophysics Group is the impressive six metre radio telescope on the roof of the School of Physics. The Coldrick Observatory was funded through the generosity of William Coldrick, after whom the telescope is named. 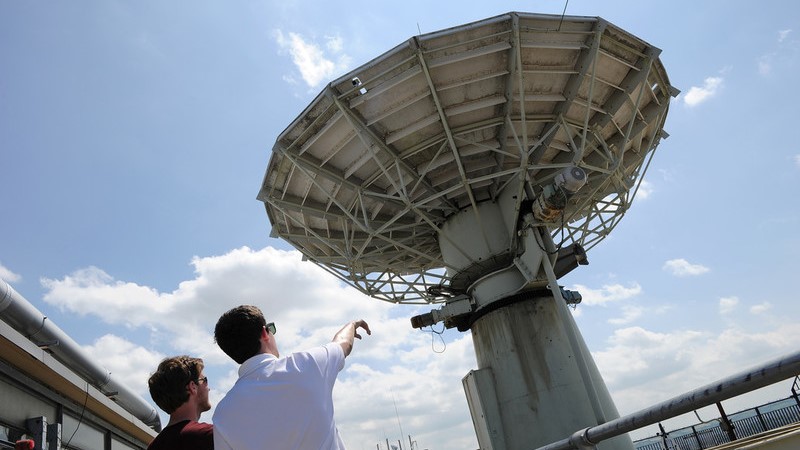 Its Cassegrain geometry has been designed to operate between 4.5 GHz and 25 GHz, making it very suitable for studying water masers at 22.235 GHz.

The 22 GHz front-end receiver is a copy of a MERLIN K-band receiver which is about to be (re-) installed on the telescope. The receiver operates in both circular polarisations and the polariser and the first amplifiers are cooled to 10 K by a closed-cycle helium refrigeration system. This apparatus was funded by a JREI grant to MD Gray.

The front-end converts the signals to an intermediate frequency (IF) near 4.2 GHz. These will be further converted to a second IF at 150 MHz in a mixer stage on the telescope using a local oscillator whose frequency can be adjusted by the supervising computer to allow for the Doppler effect of the Earth's velocity. This part of the receiver has been developed and built in-house.

The back end is a fully-digital, real-time Fast Fourier Transform Spectrometer, developed by the Group in partnership with AphaData Parallel Systems Ltd (Edinburgh) and Beam Ltd (Bristol). Fourier transforms are taken in real time by FFT code written for field programmable gate arrays (FPGA). The data are therefore integrated in the frequency domain. This very flexible arrangement will be used to provide a pair of power spectra with 4096 channels over 25 MHz.

The observatory also has the use of a 25-cm Meade optical telescope with CCD camera, which is mounted in a dome on the roof of the Physics building.

The Coldrick Observatory on the roof of the School of Physics is used to survey our Galaxy for sources of maser emission. Find out more about our Astrophysics research here.

William Coldrick was a graduate of the University of Bristol, who along with funding the observatory also endowed the Chair in Astrophysics and Cosmology presently held by Professor Mark Birkinshaw.