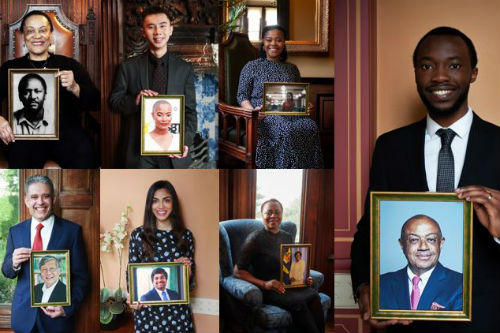 Law School alumnus Lord Paul Boateng is featured among the photographic portraits unveiled by the University of Bristol that celebrate some of its Black, Asian and minority ethnic (BAME) staff, students and alumni who have led the way in education, the arts, economics, politics, activism and social change.

The portraits, which are on permanent display in the Reception Room of the Wills Memorial Building from Thursday 22 October, commemorate the first anniversary of the University’s Be More Empowered for Success programme which supports Black, Asian and minority ethic students.

From Law School alumnus Lord Paul Boateng, one of the first three Black British MPs, to Hannah Dualeh, whose work as a sabbatical officer at Bristol Students’ Union led to the creation of the Be More Empowered programme itself, each of the seven portraits represents a member of the University who has brought about significant change here in Bristol and across the world.

They are accompanied by current and recent staff, students and alumni whose research, learning or work connects them to these figures, and who are themselves change makers, leaders and influencers.

Robiu Salisu, BAME Student Inclusion Officer, who co-ordinated the project who currently leads the Be More Empowered programme, chose to appear with a portrait of Lord Boateng.

He said: “In my current role at Bristol, I am inspired by Lord Boateng’s journey from activism to creating meaningful change within the British political system and paving the way for the future generations of Black, Asian and minority ethnic politicians.

“Lord Boateng’s story serves as a reminder to many across the country, including myself, to be alert to injustices wherever they may exist and to exert efforts to increase representation and equality of opportunity for all.”

Lord Boateng added: “I’m enormously honoured to be featured in these portraits alongside others whose contributions I admire and respect. Bristol, as a University gave me the best possible start in the study of the law.

“Bristol today is on a fast-accelerating journey towards becoming a more inclusive and diverse institution, mobilising support and resources to this objective in new and exciting ways of which this exhibition is one. The University, its staff and student body deserve support and credit for that.

“There is no room for complacency. The individual achievements that these portraits represent could only have come about through a fortunate combination of personal effort, an excellent education for which I am grateful, and the support of many others whose pictures do not feature but who have made us what we are. I include the St Paul’s community in Bristol whom I represented as a lawyer in the troubled 80s amongst those.

“My hope is that this exhibit will both inspire and challenge an upcoming generation irrespective of racial origin to do more, and to make the demand for a fairer and more inclusive society. This demand is as necessary as ever, for if there is one lesson we all need to take way in Black History Month, it is that power concedes nothing without a demand it never has and it never will.”

Olivette Otele, Professor of the History of Slavery, is one of the Bristol academics featured. For her portrait she is pictured with Dame Pearlette Louisy, Governor General of Saint Lucia from 1997 to 2017 who completed a PhD in the Department of Education at Bristol in 1991.

Professor Otele said: “This project is incredibly important and shows that there are many ways to contribute to the questions of representation and equality.

“I’m truly honoured to have been chose to be amongst such powerful role models. Dame Pearlette was a pioneer and a dedicated educator whose positive impact spans across several decades. It is a privilege to sit beside her portrait.”

The other portraits feature:

Professor Judith Squires, Provost and Deputy Vice-Chancellor, said: “I am extremely proud to see these influential members of our community take their rightful place on the walls of the Reception Room. At a time when we are reflecting on our institutional history, and making a clear commitment to address racism at every level, this exhibition allows us to shine a light on the achievements and contributions of some of our most inspiring Black, Asian and minority ethnic staff and students.”

The Be More Empowered portraits complement a series of portraits celebrating women at the University of Bristol which were launched last year to mark 100 years since the first women in Britain won the right to vote, and in which the Law School’s Dr Katie Bales was featured with The Right Honourable the Baroness Hale of Richmond, the first female President of the Supreme Court and former Chancellor of the University of Bristol. Both sets of portraits were photographed by Jessica Augarde.

To celebrate the launch of the portraits a free online event, Towards a Decolonised University, will take place from 6.30pm-8pm on Thursday 22 October. This is open to everyone.

They will discuss the importance of critical engagement on the ways in which the knowledge and resources we encounter at university is shaped by the impact of colonial power structures, and how to create solutions which address racism and colonial legacies in our university. It is hoped this panel event will encourage discussion among students, staff and members of the wider public. To book, click here to register on Zoom.