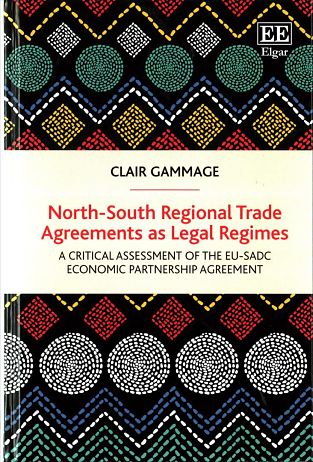 The launch of Dr Clair Gammage's new book was celebrated in an event that explored the policy implications of trade agreements in the context of Brexit through lively panel discussions.

In her new book North-South Regional Trade Agreements as Legal Regimes Dr Clair Gammage examines the manifestation of European Union (EU) policy regarding regionalism in relation to African, Caribbean and Pacific States. In particular, she identifies the importance of going beyond a 'laundry list of obligations' towards a 'wider trade and development relationship'.
In a workshop held at the University of Bristol on the 4th October as part of the book launch event, Dr Gammage's findings were examined in the light of the Policy Coherence Development initiative promoted by the European Commission in 2017, alongside the current negotiations regarding British Exit of the EU (Brexit). A recent report on ‘Human Rights and Business’ from the UK Parliamentary Joint Committee on Human Rights indicates that it would expect the types of human rights clauses in EU bilateral and multilateral free trade agreements (FTAs) to be replicated - and even improved - in UK external relations relating to trade and it is timely to consider how this can be achieved.
The book's launch event  featured two panel discussions - one examining the dynamics of North-South trade agreements, the second considering the planning for and effects of Brexit.
The first panel (Clair Gammage, Maria Garcia and Tonia Novitz, chaired by Phil Syrpis) examined the external policies of the European Union (EU) particularly in the context of regionalism and free trade agreements (FTAs). The significance of power disparities between trading partners in the negotiation process was considered and it was argued that true ‘partnerships’ in trade will be established through an inclusive and participative approach, as advocated by Clair Gammage in her book on North-South Regional Trade Agreements as Legal Regimes (Edward Elgar, 2017).
The second panel (Emily Jones, Sophie Hardefeldt and Gabriel Siles-Brügge, chaired by Tonia Novitz) examined how the UK could – in the event of Brexit – depart from or improve on the practices of the EU. Issues regarding human rights protections, development and transparency were considered, echoing many of the themes emerging from the discussion of the first panel.
For a full report of the evening and panel discussions please read the Law School blog post written by Dr Clair Gammage and Professor Tonia Novitz.

Dr Clair Gammage is a Lecturer of Law at the University of Bristol and the School's Director of Employability. Clair's research interests relate to the relationship between trade and human rights, and the trade:development nexus. She is a scholar of WTO law and writes extensively on the EU's common commerical policy and development assistance through regional trade agreements. As an international economic lawyer, Clair's broader research interests include: international trade law (WTO); economic and social development; spheres of governance; international politcal economy; human rights; and, corporate social responsibility.