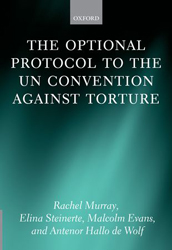 An important new book on The Optional Protocol to the UN Convention Against Torture (OPCAT) has been written by members of the University of Bristol Law School's Human Rights Implementation Centre and published by Oxford University Press.

The Optional Protocol to the UN Convention Against Torture (OPCAT) establishes an independent international monitoring committee (SPT) which itself will visit states and places where persons are deprived of their liberty. It also requires states to set up independent national bodies to visit places of detention.

The book, drawing upon events held and interviews with governments, civil society, members of UN treaty bodies, national visiting bodies and others, identifies key factors that have shaped the operation of these visiting bodies since OPCAT came into force in 2006. It looks in detail at the background to the adoption of the Protocol, as well as how the international committee, the SPT, has carried out its mandate in its first few years, and examines the range of places of detention that could be visited by these bodies, and the expectations placed on the national visiting bodies themselves.

The book also places the OPCAT within the broader system of torture prevention in the UN and elsewhere and identifies a range of trends arising from the different geographical regions. As well as providing an insight into its work, this detailed examination of OPCAT also provides valuable lessons for other new human rights treaties such as the UN Convention on the Rights of Persons with Disabilities and the Convention on Enforced Disappearances, which have similar provisions concerning national mechanisms.