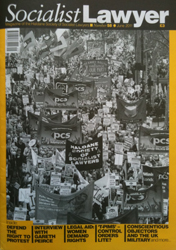 Lois S Bibbings’s work on military conscientious objection from 1914 to the present day is highlighted in an article in the June issue of the Haldane Society’s Socialist Lawyer.

Lois S Bibbings’s work on military conscientious objection from 1914 to the present day is highlighted in an article in the June issue of the Haldane Society’s Socialist Lawyer. In the piece, she presents an overview of her research on the current position of UK Armed Forces personnel who object either to involvement in a particular theatre (selective objection) or to military service (general objection).

She argues that, although under the Queen’s Regulations Service personnel who develop a conscientious objection to further service can apply to leave the Forces, the reality can be very different, with some objectors experiencing ill-treatment, punishment and non-recognition.

In addition, anecdotal evidence suggests that there is a tendency to use informal means to deal with such men and women, bypassing the formal legal provision and distorting Ministry of Defence statistics on the number of claims of objection made. In the light of this, she calls for further research around these issues.

" ... Since 1970 regulars and reservists who develop a conscientious objection have been able to ask to leave the Services. There is separate provision for this within the Queen’s Regulations for each branch of the Armed Forces. If refused by the Army, Navy or Air Force, a Serviceman or woman can appeal to the Advisory Committee and hope for a favourable recommendation to the Secretary of State. However, the measures, along with the procedures for making a claim and the information we have about how objectors are treated in practice, raise serious concerns. ..."

" ... At the moment, although there are measures allowing for the release of military conscientious objectors, they, along with the procedures for assessing claims of conscience, are flawed and are apparently sometimes bypassed. Their existence is also veiled in secrecy, with few Service personnel aware of their existence. As a result, some objectors take matters into their own hands, choosing to go absent without leave and suffer the consequences rather than act contrary to their beliefs. ..."

" ... Perhaps most fundamentally the regulations include no clear definition of conscientious objection, leading to potential confusion and inconsistency. ..."