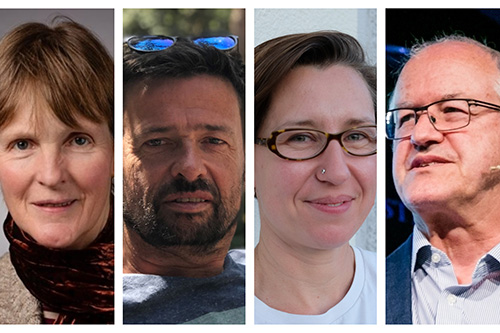 University of Bristol academics Professor Mike Benton, Dr Ellen Brooks Pollock, Professor Tim Cook and Professor Jane Memmott have all received awards in this year’s Queen’s Birthday Honours list which recognises the achievements and service of people across the UK.

Mike Benton, Professor of Vertebrate Palaeontology, from the School of Earth Sciences has been awarded an OBE for services to palaeontology and to community engagement, including leadership of the Bristol Dinosaur Project, which has reached thousands of children in Bristol in the past 12 years. His programme At the Feet of the Dinosaurs has built links with the City Museum and trained many undergraduates in research skills.

Professor Benton has always been passionate about communicating science. His current research focuses on biodiversity, extinctions and palaeobiology, and he leads a group of 20 young researchers exploring all these themes.

He has led field work, both in the UK and around the world, and has collaborated with colleagues throughout Europe and North America, but also Tunisia, Romania, Russia and China to research the life and times of dinosaurs and other extinct animals, often using state-of-the-art imaging and computational tools.

A special focus has been the end-Permian mass extinction, the greatest mass extinction of all time, and especially its effects on terrestrial organisms. New evidence from China and Russia from field-based projects has helped to identify how the crisis was driven by rapid global warming and acidification, and then how life recovered, and modern ecosystems were put in place.

He has also worked on the colour of dinosaur feathers, showing how palaeobiologists use the latest methods to discover new facts about the life of the past.

His current work uses large computing resources to explore patterns and processes of macroevolution of species-rich groups such as lizards, birds and mammals. He has written more than 600 scientific papers and more than 50 books on a broad range of topics.

He has supervised more than 70 PhD students, and was founder of the Bristol MSc in Palaeobiology, which has welcomed 450 students since its foundation in 1996.

Professor Benton said: “I’m amazed to receive this, and am very grateful to the kind people who must have sent letters of support.”

Dr Ellen Brooks Pollock, Senior Lecturer in Infectious Disease Mathematical Modelling, from the Bristol Veterinary School, the National Institute for Health Research (NIHR) Health Protection Research Unit in Behavioural Science and Evaluation in Population Health Sciences has been awarded an OBE for her services to the Scientific Pandemic Influenza Group on Modelling (SPI-M) and the Scientific Advisory Group for Emergencies (SAGE) during the COVID-19 response.

Dr Brooks Pollock has worked in infectious disease modelling for 15 years. During the COVID-19 pandemic, she has been a regular contributor to SPI-M, a subgroup of SAGE that provides modelling evidence to the UK government.

Her current work to support the UK’s COVID-19 response during the pandemic includes quantifying the role of groups and gatherings on COVID-19 transmission, demonstrating that single-person households could safely form a bubble with other households, the impact of temporarily easing restrictions during the Christmas period, modelling the spread of COVID-19 in universities and measuring the increased mortality associated with the B.1.1.7 (Alpha) variant.

She is the Bristol co-lead for the JUNIPER (Joint UNIversities Pandemic and Epidemiological Research) consortium and last month she guest edited the Philosophical Transactions of the Royal Society B Special Issue on ‘Modelling that shaped the early COVID-19 pandemic response in the UK’.

She is passionate about communicating mathematical modelling in non-technical ways and has been on the editorial board of Mathematics Today since 2017.  In 2011, she was jointly awarded the Institute of Mathematics Catherine Richards prize for the article ‘Pigs didn’t fly, but Swine flu‘ about modelling the H1N1 influenza pandemic.

Dr Brooks Pollock said: “I am one of many modellers and scientists supporting the COVID-19 response in the UK and worldwide. I have been studying infectious diseases for 15 years and COVID-19 has tested our knowledge of epidemics and how to control them.

“It’s been a privilege and a unique experience to work with fantastic scientists from all over the UK - mostly without leaving home.  I am delighted to receive this award and plan to continue to disease modelling for many years to come.”

Professor Tim Cook, Honorary Professor in Anaesthesia, from the Bristol Medical School: Translational Health Sciences (THS) has been awarded an OBE for his services to anaesthesia during COVID-19.

His overall interest is in improving safety and quality in anaesthesia and intensive care using a bottom-up approach. He was awarded the Royal College of Anaesthetists (RCoA) Macintosh Professorship in 2012-13 and in 2014 the Difficult Airway Society Professorship.

In January 2020, he became aware of the pandemic risk of COVID-19 and spent the next two months highlighting the risk and raising the alarm that the pandemic was coming to colleagues locally and nationally working with the Royal College of Anaesthetists and Association of Anaesthetists to disseminate information to allow for early preparedness. Clinically, he spent several months working from home and has since returned to Anaesthesia and Intensive Care medicine in Bath.  In advisory and academic roles, he has worked with colleagues in Bath, at the Health Service Research Centre at the Royal College of Anaesthetists and with Bristol’s AERATOR research group.

He has collaborated on numerous research papers in the last 18 months work that includes:

“I would like to pay tribute to all members of both clinical and academic teams I have been part of. Colleagues have worked with skill, self-sacrifice and dedication in exceptionally difficult times. I would also like to thank my family for the constant support they have provided.”

Jane Memmott, Professor of Ecology, from the School of Biological Sciences and Director of the University’s Botanic Garden has been awarded an OBE for her services to insect pollinators and ecology.

Professor Memmott Hon FRES is an ecologist and entomologist and in 2020 was made President of the British Ecological Society.  Her research focuses on community ecology, and she is an expert on the interactions between insect pollinators and plants.

Her research group uses a wide variety of techniques to answer environmental questions, such as whether ecosystem services are affected by farming approach and how alien species integrate into ecological networks. She works as both a pure and an applied ecologist and is keen on working at the interface between the two disciplines.

She has shown that urban habitats can be excellent for pollinators and host more bee species than the surrounding farmland.  She is an advocate for increasing the flower resources available to pollinators in urban areas, an approach which has the bonus of being enjoyed by people as well as pollinators.

She has also studied the way in which resources available to insect pollinators have changed over the past century. In her research of long-term vegetation surveys, she found that nectar resources in the UK declined by nearly a third up to the 1970s, likely due to  agricultural intensification, since then resources have increased slightly though not to the point of recovery.

She also researches agroecosystems. Her research has shown that there are significant gaps seasonally in resources for pollinators from plants, such as pollen and nectar, in early spring and late summer; this knowledge could be used to alter the species mix of wildflower strips as part of agri-environment schemes.

Professor Memmott said: “I’m delighted to receive this award and would like to thank the people who made it possible – particularly all the amazing early career scientists who have worked with me on these research projects, along with some wonderful collaborators.”

Professor Benton's latest books include the standard textbooks in palaeontology, Cowen’s History of Life (Wiley, 2019) and Introduction to Paleobiology and the Fossil Record (with David Harper, Wiley, 2020), as well as a presentation on the transition of palaeobiology from speculation to science over the past 30 years, Dinosaurs Rediscovered (Thames & Hudson, 2020). His latest book, The Dinosaurs: New Visions of a Lost World (Thames & Hudson, 2021) shows startling new images of what dinosaurs really looked like for the first time, and based on hard scientific evidence.

Professor Tim Cook has academically, over the last 15 years, been involved in leading and guiding five Royal College of Anaesthetists (RCoA) National Audit Projects learning from major complications of anaesthesia: as clinical lead for epidurals/spinal anaesthesia and airway management and as co-lead and director of the program for accidental awareness during general anaesthesia, perioperative anaphylaxis and perioperative cardiac arrest, which will launch next week. These projects involve the nation’s anaesthetists collaborating to shine a light on patient-centred aspects of anaesthetic practice and safety. They are a form of professional-citizen science and are recognised to have changed the landscape of UK anaesthesia clinical practice and anaesthesia research engagement.