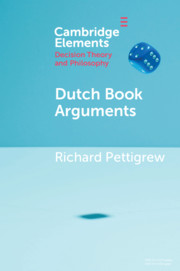 Our beliefs come in degrees. I’m 70 per cent confident it will rain tomorrow, and 0.001 per cent sure my lottery ticket will win. What’s more, we think these degrees of belief should abide by certain principles if they are to be rational. For instance, you shouldn’t believe that a person’s taller than 6 ft more strongly than you believe that they’re taller than 5 ft, since the former entails the latter.

In Dutch Book arguments, we try to establish the principles of rationality for degrees of belief by appealing to their role in guiding decisions. In particular, we show that degrees of belief that don’t satisfy the principles will always guide action in some way that is bad or undesirable. In this Element, we present Dutch Book arguments for the principles of Probabilism, Conditionalisation, and the Reflection Principle, among others, and we formulate and consider the most serious objections to them.