L: Eleanor Griffin during some winter training downtime. TR: Eleanor on the skeleton track. BR: Eleanor training at the push track in Bath

A Bristol graduate has swapped the hush of the University’s Law Library for high-octane sled races down icy tracks.

Eleanor Griffin is a full-time skeleton athlete, which sees her slide headfirst down the same courses that bobsleigh and luge athletes use.

The 23-year-old uses her feet and bodyweight to steer the sled as she reaches speeds of 80mph.

Despite only picking up the sport last year she has her sights set firmly on the Olympics.

It was during the final year of her law degree at the University of Bristol that Eleanor saw the Girls4Gold advert about tryouts for the GB skeleton team.

Hundreds of applicants were whittled down to just a handful through a series of physical and mental tests, with an emphasis on their explosive strength and cool heads under pressure.

Eleanor, a former county level sprinter and decorated university rower, aced the tests. But it was only after several months that the final aspirants were faced with a real track in Lillehammer, Norway.

Eleanor said: “The first time we saw a track we weren’t overloaded with information about how to slide. We were put in helmets and pushed down: they wanted to see our natural instincts.

“I was excited though, and much less scared than I thought I would be. I just knew that I had this incredible opportunity in front of me, I think that’s what was fueling me.”

Now a fulltime athlete, Eleanor trains three times a day, six days a week. In the summer the training takes place in the gym and at the UK’s only artificial push track, in Bath.

In winter – the season has already started for Eleanor – she spends months living in hotels and travelling between European skeleton tracks.

Unlike its sister sport, the luge, which is a sitting start, the skeleton begins with a short but all important sprint.

Deemed too dangerous, the skeleton was dropped after the 1948 winter games and only reappeared in Salt Lake 2002.

In 2001, a Latvian skeleton athlete died on a training run when he collided with an empty sled left on the track. Three luge athletes have died at major competitions, including one in 2010.

Danger is kept at bay by regularly servicing the sleds and constant vigilance during practice “slides”, as their runs down the track are known.

“My parents are very proud because they know this is a dream for me, although my mum says she’d rather it was a slightly tamer sport!” said Eleanor, who grew up in Luton. 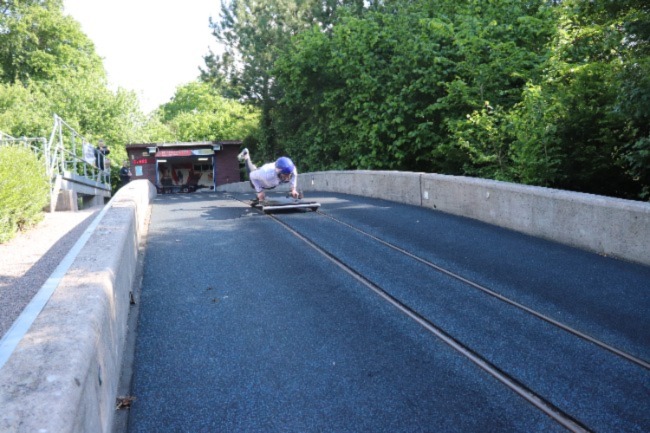 But in Beijing this year Team GB’s women came 19th and 22nd and its men 15th and 16th. Less than a second separated the runs of the winning athletes and those of the disappointed GB athletes.

Eleanor hopes to spur a return to success in Italy 2026.

Eleanor said: “The dream is definitely Olympic gold. If I keep working hard and get the right support, hopefully we’ll get there.”

Once finished with skeleton Eleanor plans to become a corporate lawyer.

Matt Birch, Director of Sport, Exercise and Health at the University of Bristol, said: “Eleanor’s impressive achievements as a skeleton athlete – not to mention as a top rower and sprinter – are all the more impressive when you consider her academic success as a law student too.

“We can’t wait to see Eleanor competing and we’ll all be rooting for her as she slides toward Olympic success!”

Ed McDermott, one of Eleanor’s coaches at British Skeleton, said: “Eleanor has progressed exceptionally well in her first full summer of training with the performance programme.

“Over the summer we focus our efforts on physical and push developments as well as developing ice skills, such as track knowledge, visualisations techniques and self-review.

“Eleanor has made great strides in all of these areas, especially on the push track where she has numerous PBs. Her progress is very promising and I have full confidence she can transfer all of these skills onto ice.”