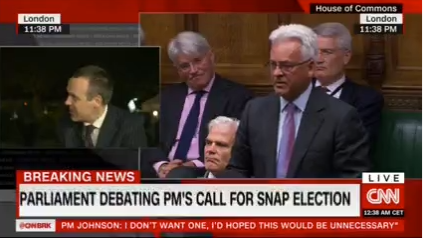 Incoming Law School student, Robert Craig, who joined the Law School this month, was interviewed on CNN about the PMs attempts to push through a no-deal Brexit.

Craig commented on the UK Government's position in regard to the bill blocking a no deal Brexit and any possible EU extension - and the impact of the Law on proceedings.

Earlier this year, Craig was cited in a UK Supreme Court decision on a major constitutional law case. He joins Bristol to complete his PhD with Professor Gavin Phillipson who has also been engaged in recent Brexit debates on the issue of prorogation of Parliament.

Robert Craig is currently pursuing a PhD considering the role of the Royal Prerogative in the modern UK constitution and teaches UK Constitutional Law. Robert focuses on Public Law with emphasis on constitutional law and legal philosophy. He has had articles published in the Modern Law Review and Public Law.