Celebrating students standing up for Human Rights in The Gambia 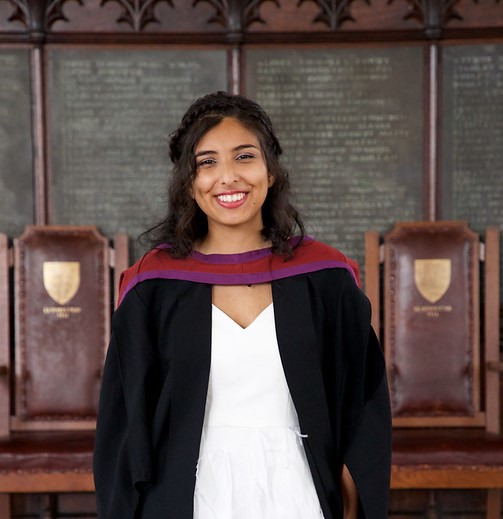 December 10th was Human Rights Day – an annual event that marks the day the United Nations General Assembly adopted the Universal Declaration of Human Rights (UDHR). This year the UN put the spotlight on the leadership role of youth as a source of inspiration for a better future, presenting an opportunity for us to showcase the amazing work of our students.

The Law School's Human Rights Implementation Centre (HRIC) is a leading institution for the implementation of human rights, working in collaboration with a number of organisations and bodies, including those in the United Nations, the African Union, the Council of Europe, governments and organisations at the national level.

Since 2011, the Centre has had a collaborative relationship with the Faculty of Law at the University of Gambia (UTG) - each year facilitating a postgraduate student to teach law at the UTG for an academic year. This year LLM student Raeesa Rajmohamed was chosen as the Visiting Scholar - a role that included the development of the Gambia Law Clinic of which Raeesa is now the Executive Director.

“I have been humbled by my students, and their eagerness to engage in human rights issues. Bringing up taboo topics and local human rights violations in my classes was at first daunting, I feared retaliation, offending my students or even losing my job. However, I found an eagerness to engage in these, sometimes uncomfortable, discussions. They courageously argued against cultural norms within their society and questioned current value systems and their implications.

“It has become starkly clear that the road to upholding human rights and progressing in the human rights field, lies in the youth challenging what has so often been accepted as the norm. It is through their questioning, passionate views, or even mere eagerness to talk about it, that real change will occur. So far it is through passionate emails to their lecturer, but in the future, I know it will be the same content on a national and influential scale.”

Raeesa took over from LLM graduate Anamaria Fonsêca, who cites the experience as influencing her decision to follow a route into academia.

“In The Gambia I was responsible for teaching the International Human Rights Law unit to Law undergraduates. I also led the editing of the annual Gambia Law Review. Alongside my job in The Gambia, I joined the Action4Justice team at Bristol Women’s Voice to develop a research paper on Arrest/Detention in The Gambia. I now want to continue my academic career as a PhD researcher specialising in the rights of refugee women."

Past Visiting Scholars also include Emily Littlehales and Christopher Gray.

In a previous interview, Emily Littlehouse (LLM International Law and International Relations) discussed how The Gambia saw her "experience a world entirely different” to the one she’d known.

“I was given work opportunities that would be unattainable back home, and was trusted with projects that I’d previously never dreamed of beginning. I learned so much about character and excellence from inspiring colleagues at UTG – a whirlwind I’d recommend to those keen for adventure, courage and expanded thinking.”

Whilst, Christopher Gray (Socio-legal Studies MSc) discussed how the experience opened his eyes to the role universities can play in making change happen.

“Having the opportunity to teach law at the University of The Gambia was decisive for me in deciding to continue with academia. It broadened my experience of universities as a place to drive change, and I was able to supplement my teaching responsibilities with other initiatives both within the university and in the broader legal community.”

During her placement in The Gambia Emily accompanied a team of UTG students to the International Criminal Court Moot Court Competition in The Hague, the Netherlands, an event Emily filmed, making it possible to share the experience with others.

Find out how you can #DoMoreWithLaw in Human Rights with an LLM in Human Rights Law   or as a PhD student.  To get a feel for studying at the Law School, you can get a guided tour with Raeesa Rajmohamed on our YouTube channel!