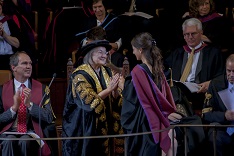 The annual graduation ceremony for law students took place on 15th July 2014. As always, it was an important way of recognising the achievements of our students and the support given to them by their families. The degrees were formally awarded by Baroness Hale, Chancellor of the University and Deputy President of the Supreme Court of the United Kingdom. Afterwards a reception was held for graduating students and their families and prizes were awarded for outstanding achievement. The School of Law would like to congratulate all graduates on their success and wish them the best for the future.

At the graduation ceremony an honorary LLD was also awarded to the Right Honourable Lady Justice Victoria Sharp, a Bristol graduate who, after four years on the High Court bench, has been appointed to the Court of Appeal. Lady Justice Sharp has been highly supportive of the School of Law and its students, and we are delighted to recognise her achievements in this way.