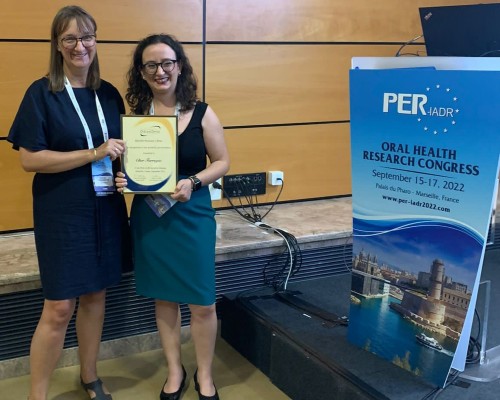 Dr Farrugia being presented with the award during this year's [15 Sept] International Association for Dental Research meeting in Marseille, France.

Dr Cher Farrugia, a dentist and researcher at the University of Bristol Dental School, has been awarded the prestigious British Society of Oral and Dental Research (BSODR) President's Prize for her research in translational microbiology.

The award is made annually to an early-career researcher who has made a significant contribution to basic, translational or clinical dental research. This year’s prize was awarded to Dr Farrugia for her work on two translational microbiology projects focusing on the standardisation of antimicrobial testing, and on the link between periodontal/gum disease and cardiovascular disease.

Dr Farrugia’s work on the standardisation of antimicrobial testing of dental devices and materials stemmed from a lack of antimicrobial testing standardisation. Following international collaboration with several European centres, the work culminated in a paper which summarised current testing techniques and their limitations. Proposals from this study, have been referenced in a new International Standards organisation (ISO) document being developed: "ISO/DIS 3990 Dentistry — Evaluation of antibacterial activity of dental restorative materials, luting cements, fissure sealants and orthodontic bonding or luting materials", the first standard of its kind. This work aims to increase clinical relevance of antimicrobial testing, as well as facilitating comparisons of tests carried out in different centres and laboratories when a new or modified material is being developed.

Research on the link between periodontal disease and cardiovascular disease focused on the role of anaerobes, a type of bacteria which can survive and grow where there is no oxygen. Anaerobic bacteria are frequently associated with gum disease but have also been found in other areas of the body, including blood vessels. They have been shown to play a role in the link between oral health and general health (oral-systemic link).

Through this research it was identified that gum-disease associated anaerobic bacteria, as well as their outer-membrane vesicles, small parcels of the outer membrane of these bacteria can lead to vascular damage. Proteins present on the outer membrane of bacteria damage cells that maintain the structure of blood vessels (endothelial cell-adhesion molecules), and as a result the blood vessels become more leaky/permeable. This research has also shown that these bacteria, similarly to when they are present in the mouth, also like to adhere to each other when they are in blood vessels. Similarly increased permeability of blood vessels occurred after infection of a group of different anaerobes. Blood vessels that are too leaky are more susceptible to malfunction and to in turn develop faults which can lead to cardiovascular disease such as atherosclerosis (blocked arteries). The findings have led to a better understanding of molecular science behind the oral-systemic link, how bacteria in our mouths can play a role in damage in blood vessels in our body and therefore potentially play a role in facilitating cardiovascular disease.

Dr Farrugia was formally awarded the prize on the 15 September 2022 during this year's International Association for Dental Research meeting(PER-IADR Oral Health Research Congress) in Marseille, France.