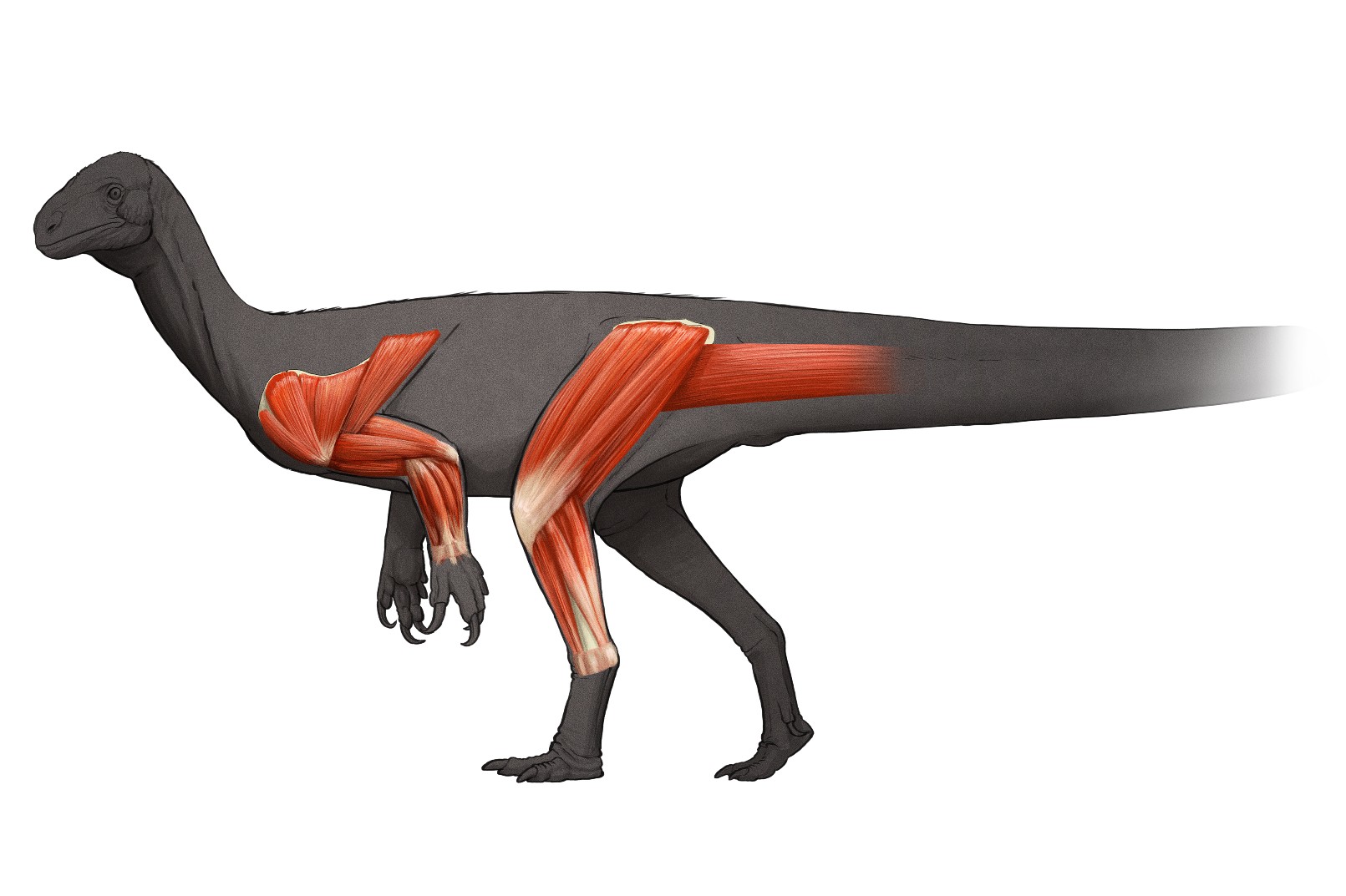 New research led by the University of Bristol has revealed how giant 50-tonne sauropod dinosaurs, like Diplodocus, evolved from much smaller ancestors, like the wolf-sized Thecodontosaurus

In a new study published today in the journal Royal Society Open Science, researchers present a reconstruction of the limb muscles of Thecodontosaurus, detailing the anatomy of the most important muscles involved in movement.

Thecodontosaurus was a small to medium sized two-legged dinosaur that roamed around what today is the United Kingdom during the Triassic period (around 205 million years ago).

This dinosaur was one of the first ever to be discovered and named by scientists, in 1836, but it still surprises scientists with new information about how the earliest dinosaurs lived and evolved.

Antonio Ballell, PhD student in Bristol’s School of Earth Sciences and lead author of the study, said: “The University of Bristol houses a huge collection of beautifully preserved Thecodontosaurus fossils that were discovered around Bristol. The amazing thing about these fossilised bones is that many preserve the scars and rugosities that the limb musculature left on them with its attachment.”

These features are extremely valuable in scientific terms to infer the shape and direction of the limb muscles. Reconstructing muscles in extinct species requires this kind of exceptional preservation of fossils, but also a good understanding of the muscle anatomy of living, closely related species.

Antonio Ballell added: “In the case of dinosaurs, we have to look at modern crocodilians and birds, that form a group that we call archosaurs, meaning ‘ruling reptiles’. Dinosaurs are extinct members of this lineage, and due to evolutionary resemblance, we can compare the muscle anatomy in crocodiles and birds and study the scars that they leave on bones to identify and reconstruct the position of those muscles in dinosaurs.”

Professor Emily Rayfield, co-author of the study, said: “These kinds of muscular reconstructions are fundamental to understand functional aspects of the life of extinct organisms. We can use this information to simulate how these animals walked and ran with computational tools.”

From the size and orientation of its limb muscles, the authors argue that Thecodontosaurus was quite agile and probably used its forelimbs to grasp objects instead of walking.

This contrasts with its later relatives, the giant sauropods, which partly achieved these huge body sizes by shifting to a quadrupedal posture. The muscular anatomy of Thecodontosaurus seems to indicate that key features of later sauropod-line dinosaurs had already evolved in this early species.

Professor Mike Benton, another co-author, said: “From an evolutionary perspective, our study adds more pieces to the puzzle of how the locomotion and posture changed during the evolution of dinosaurs and in the line to the giant sauropods.

“How were limb muscles modified in the evolution of multi-ton quadrupeds from tiny bipeds? Reconstructing the limb muscles of Thecodontosaurus gives us new information of the early stages of that important evolutionary transition.”

This research was funded by the Natural Environment Research Council (NERC).