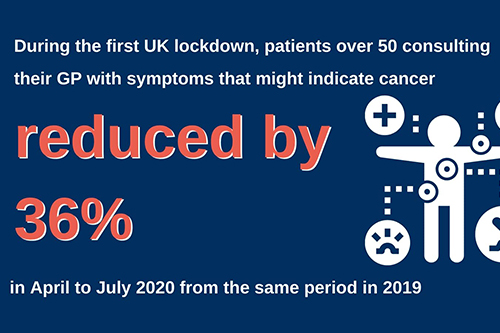 An infographic about the study OneCare

The number of patients aged over 50 reporting possible cancer symptoms to their GPs fell during the first wave of the COVID-19 pandemic, a study at the University of Bristol published in BMJ Open today [25 May] has found. The reduction in reporting was most pronounced for common symptoms, which rarely indicate cancer. It was also significant for 'alarm' symptoms, which are more likely to indicate cancer in older age groups, though most of the time they don’t.

The National Institute for Health Research (NIHR) funded researchers analysed anonymous information from 21 GP practices in Bristol, North Somerset and South Gloucestershire, covering 124,000 patients over 50. They compared data from April-July 2020 with the same period in 2019.

In 2019, potential cancer symptoms were reported in 21 per cent of face-to-face GP consultations in over 50s, compared to 13 per cent of remote consultations. In 2020, this was 17 per cent face-to-face and 14 per cent remotely. Of the most commonly reported potential cancer symptoms, reporting of chest infections, fever, coughs, fatigue and urinary tract infection reduced most dramatically. The eight alarm symptoms (blood in the urine, poo or vomit, coughing up blood, yellowing of the skin or eyes, breast lump, postmenopausal bleeding in women aged 55 and over, and difficulty swallowing) saw a less pronounced decline, but still reduced by 27 per cent overall.

During the first UK lockdown, at-risk groups such as older people and those shielding tended to access GP consultations more frequently. However, these consultations did not result in higher levels of reporting of potential cancer symptoms. This suggests that these consultations were mostly for existing or routine issues rather than new health problems.

Patients with mental health conditions had a smaller reduction in reporting of these symptoms compared to other groups. This may be because GPs were particularly focused on this group at this time.

The findings reinforce an earlier Cancer Research UK survey where GPs felt they were receiving fewer reports of cancer symptoms during the first UK lockdown.

Dr Mairead Murphy, Research Fellow at the University of Bristol, said: "We found that all over 50s had reductions in reporting of symptoms that could indicate cancer. These symptoms are more likely to result in a cancer diagnosis in older people. All patients, but particularly older age groups, should be encouraged to report potential symptoms of cancer."

Chris Salisbury, a GP and Professor of Primary Care at the University of Bristol's Centre for Academic Primary Care (CAPC), added: "It is really important that during the pandemic, patients should continue contacting their doctor with any persistent problems that could be a sign of cancer. Although many of these symptoms won’t in fact be due to cancer, it is important not to ignore anything you are concerned about."

Dr Jacob Lee, GP and Medical Director at One Care, the Bristol, North Somerset and South Gloucestershire GP federation, responded to the article, said: "GP surgeries responded rapidly to the new ways of working required by the COVID pandemic. General practice is open and has been open to patients throughout the last year – we continue to provide care to our patients who need it and want to encourage anyone who has concerns about potential signs of cancer to contact their GP surgery."

Cancer Research UK have published information for patients on common cancer symptoms to look out for: www.cancerresearchuk.org/about-cancer/cancer-symptoms

The NIHR was established in 2006 to improve the health and wealth of the nation through research, and is funded by the Department of Health and Social Care. In addition to its national role, the NIHR commissions applied health research for the direct and primary benefit of people in low- and middle-income countries, using UK aid from the UK government.

About NIHR ARC West
The NIHR Applied Research Collaboration West (NIHR ARC West) co-produces better, more equitable, appropriate and sustainable health and care across the West. It does this through applied health research projects and implementing research evidence, regionally, nationally and internationally. Co-producing research with partner organisations and the people affected by the research is at its heart. To achieve this, its researchers work with health provider organisations, including local NHS and public health, the wider health and care sector including voluntary sector organisations, patients and the public, and other ARCs and academic groups.