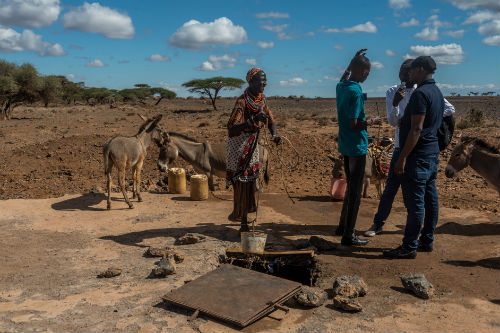 An international team of researchers and organisations has been awarded over €6.7M from EU Horizon 2020 to help tackle food and water insecurity in the Horn of Africa Drylands (HAD).

Led by scientists at Cardiff University with substantial contributions from 13 other partners in seven countries, including a team from the University of Bristol, the EU project, called DOWN2EARTH, will employ state-of-the-art seasonal forecasts and decadal projections of climate change.

It will translate this into clear and concise information that can be used by farmers and pastoralists, communities, NGOs and governments to mitigate the negative impacts of climate change on rural livelihoods.

A major component of DOWN2EARTH involves improving the accuracy of forecasting climate variability in critical rainy seasons and assessing its impact on the total amount of water stored in soils for agriculture and deeper underground for drinking water supplies.

This improved forecasting will help to better predict impacts on farming, food and water production and increase resilience across this extremely vulnerable region, allowing the population to make better, more informed decisions.

Principal Investigator of DOWN2EARTH, Dr Michael Singer, from Cardiff University’s School of Earth and Ocean Sciences and Water Research Institute, said: “Adaptation to climate change requires better and more timely information about the expression of climate at the land surface, in soil moisture required to grow crops and groundwater for drinking.

“This information needs to be delivered to people making decisions at multiple levels of society, from rural agro-pastoralist villagers deciding what and when to plant crops or move their herds, to government ministries developing new land and water management policies, to NGOs mounting humanitarian responses to drought-related famine.”

A key aspect of DOWN2EARTH will be the support given to multi-level stakeholders about to how expand their knowledge of the climate and to better use information that is gathered from climate monitoring and predicting systems.

Dr Singer added: “We will do this in the form of desktop and mobile phone apps that deliver timely information from our modelling on projected water storage and crop yields for upcoming seasons.

“This information, based on the best available climate forecasts, will be co-developed with the target stakeholders to ensure it is useful to improve decision making at all levels from village to government ministry.”

Under the influence of climate change, the “new normal” in the HAD will be characterised by March-to-May drought about every other year, but it is unclear whether other rainy months will support opportunities for adaptation to this drought-prone situation.

The project focuses on the Horn of Africa drylands (HAD) in Kenya, Somalia, and Ethiopia, one of the most food insecure regions on Earth. The rural communities of the HAD are particularly vulnerable to food insecurity and associated economic losses during drought conditions due to low socio-economic levels and limited ability to respond to these climatic shocks.

The project will also assess the socio-economic dimensions and human dynamics of climate change including feedbacks between climatic shocks, human behaviour and policy implementation.

Dr Singer said: “The broader goal here is to support the co-creation of new climate adaptation policies that acknowledge the needs of rural villagers and also remain faithful to the best available science on future climate change.”

Part of this work will be undertaken by project partners BBC Media-Action who will be developing and training radio stations in the region to produce new programmatic content addressing issues of climate change adaptation.

Dr Singer concluded: “This is part of our larger communication strategy to improve the messaging about climate change and decision options to larger audiences in the region and beyond.”

The University of Bristol is the second largest partner in this consortium with a diverse team of researchers including dryland hydrologists, climate scientists, hydrometeorologists and computer scientists across three departments.

The Bristol team are leading the climate trend analysis and development of the mobile phone app, and are heavily involved in the modelling of water and food security. This project builds on existing expertise by the Bristol team on the climate change impacts in East African drylands.

Dr Katerina Michaelides, the Bristol team’s Principal Investigator, from the University’s School of Geographical Sciences, said: “This multi-disciplinary project is an exciting opportunity to combine science and policy with scope for substantial impact in the region.

“By bringing together so many different institutions within the UK, EU and East Africa, and enhancing the communication between academic and non-academic actors, we plan to make significant advances in our understanding of climate impacts on water and food resources as well as how people make decisions to adapt, and how institutions create new policies.

“The idea is to link up all the important facets of the climate adaptation problem within the Horn of Africa Drylands in order to create lasting impact.”