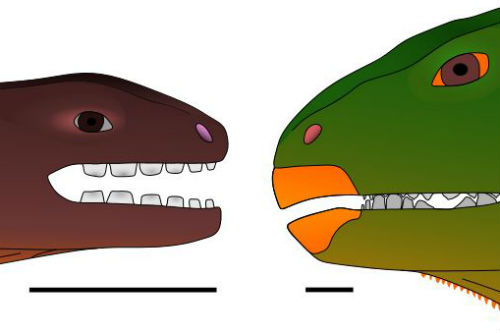 Reconstructed heads of the Ruthin reptiles – Smilodonterpeton, the chisel-toothed plant-eater (left) and Tricuspisaurus, the beaked beast (right), both of them unique to the island (scale bars=5mm) Drawings by Matthew Skinner 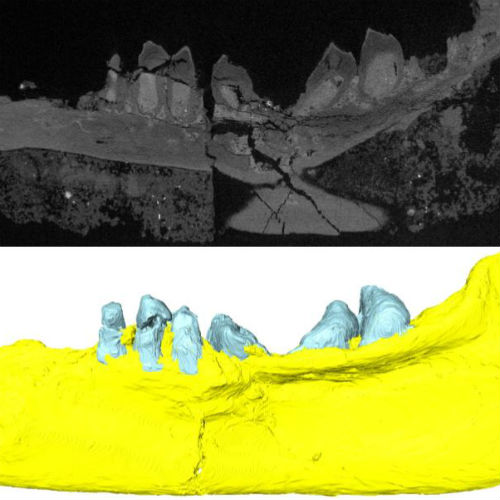 CT scan and 3D digital model of lower jaw of Tricuspisaurus (below, scale bar=5mm). The scan shows the base of its teeth embedded in tooth sockets. A clear tooth socket lacking a tooth is visible at the back of the jaw University of Bristol 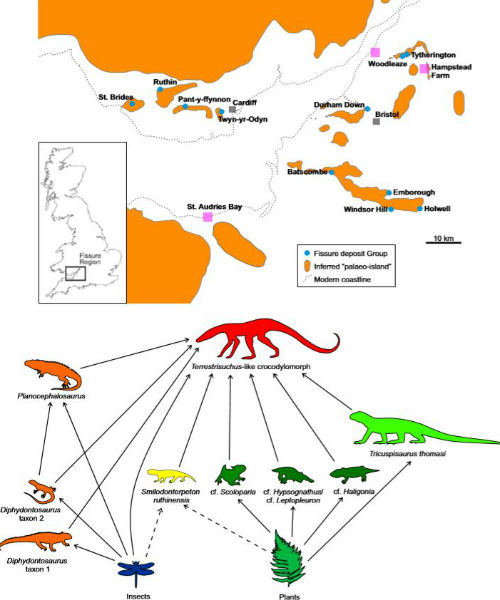 A map of the Bristol channel (above), outlining the modern channel and showing where the ancient ‘palaeo-islands’ would have existed. A food web (below) displaying all of the recognised reptilian animals from Ruthin with plants and insects at the base. Insects are eaten by the lizard-like reptiles (Rhynchocephalia) and possibly some procolophonids and plants are eaten by procolophonids and Tricuspisaurus. The slender crocodile-like reptile is recognised as the top predator among the animals found University of Bristol

Matthew Skinner, a student from the University’s School of Earth Sciences, studied a collection of fossils that had been collected in the 1950s from Ruthin Quarry in South Wales as part of his MSc thesis. In the Late Triassic, Ruthin was a small island set in a tropical sea; at that time, the UK lay much closer to the Equator.

The thousands of fossils that make up the collection housed in the National Museum of Wales, were hard to study because they are mostly smaller than a fingernail, and quite fragile, so they had to be handled very carefully.

In the Late Triassic, 205 million years ago, the Atlantic Ocean had not yet opened, but it was beginning to unzip, as continental drift pulled North America and Europe apart.

Matthew Skinner said: “We were amazed to discover that most of the Ruthin beasts showed greatest similarity to relatives from North America. Of course, at that time, one could just hop across from South Wales to New York.

“The islands provided little space and food and so regular-sized animals couldn’t survive on them; the Ruthin animals were all dwarf versions of their closest mainland relatives, maybe half the size on average.”

Professor Mike Benton, who supervised the project, added: “Our other questions were about the effects of island life. We know today that animals on remote islands can evolve in different ways from on the mainland.

“Often they become smaller, as there is less food, and they might be anachronistic – meaning they are throw-backs to much more ancient animals from the mainland.”

The Ruthin island reptiles include a new species, Smilodonterpeton ruthinensis (‘chisel-toothed reptile from Ruthin’), and three other small reptiles which belong to an ancient group called the Procolophonidae.

Other animals recognised include a slender crocodile-like reptile, three species of lizard-like reptiles related to the tuatara of New Zealand and the strange, plant-eating Tricuspisaurus thomasi, which had been named in 1957 by one of the earlier collectors.

Dr David Whiteside, another supervisor, said: “It has been questioned for many years how Tricuspisaurus is related to the other reptiles.

“I was keen we found out what it really was, and Matthew was able to CT scan the specimens, and this showed that its teeth were located in tooth sockets, and it had a beak at the front of its jaws. This confirms it was not a procolophonid, as had been thought, but a distant relative of birds, crocodiles and dinosaurs.”

Matthew added: “It’s extraordinary how much modern technology can reveal about these animals that we otherwise would be unable to see before without breaking the fossil’.

“Ruthin is one of many such sites around South Wales and Bristol recognised to have once been islands from this ancient archipelago, but none of the others yield an assemblage of reptiles as old or as unusual as that recognised here. Also, Ruthin now has two types of animal named from the same quarry that are found nowhere else.”

‘Late Triassic island dwarfs? Terrestrial tetrapods of the Ruthin fissure (South Wales, UK) including a new genus of procolophonid’ by M. Skinner, D. Whiteside, and M. Benton in Proceedings of the Geologists’ Association