Ordering of atoms in liquid gallium under pressure 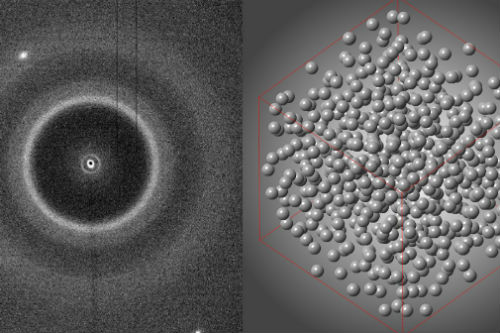 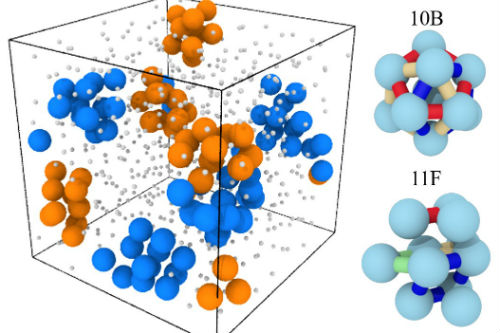 Simulation snapshot of liquid gallium at 30 GPa and 1000 K with gallium atoms shown as small grey spheres. Regions of exceptionally low configurational entropy populated exclusively by clusters of Ga atoms in five-fold symmetric (10B, orange spheres) and crystal-like (11F, blue spheres) motifs may help to stabilise the glassy phase below the high-pressure melting point. Coloured bonds highlight rings in the two structural motifs: pentagons for 10B, triangles and squares for 11F. University of Bristol

Liquid metals and alloys have exceptional properties that make them suitable for electrical energy storage and generation applications.

Low-melting point gallium-based liquid metals are used as heat exchange fluids for cooling integrated electronics and in the manufacture of flexible and reconfigurable electronic devices and soft robotics.

Gallium is an enigmatic metal with remarkable physical characteristics including an anomalously low melting point just above room temperature, one of the largest liquid ranges of any element, and a volume contraction on melting similar to that observed for water.

In contrast to the regular periodic arrangements of atoms in crystalline solids, the liquid state is characteristically disordered. Liquids can flow and their atoms move chaotically as in a gas.

However, unlike a gas, the strong cohesive forces in liquids produce a degree of order on a local scale. Understanding how this order changes at high-pressures and temperatures is important for the development of materials with novel physical properties or for operating under extreme conditions and is key to understanding processes in deep terrestrial and exoplanetary interiors, such as metallic core formation and magnetic field generation.

In a new study led by scientists from the University of Bristol, and published in the journal Physical Review Letters, in situ synchrotron x-ray diffraction measurements made at Diamond Light Source, UK of the melting curve, density, and structure of liquid gallium are reported to pressures up to 26 GPa using a resistively heated diamond anvil cell to generate these extreme conditions.

The results of ab initio Molecular Dynamics simulations, run on the University of Bristol’s Advanced Computing Research Centre’s supercomputer “BlueCrystal phase 4”, are in excellent agreement with the experimental measurements.

Previous studies predict the liquid structures of gallium and other metals develop from complex configurations with low coordination numbers at ambient-pressure to simple ‘hard-sphere’ arrangements at high-pressure.

However, using topological cluster analysis the researchers found significant deviation from this simple model: even at extreme pressures local order in liquid gallium is maintained, with the formation of regions of low local entropy containing structural motifs with five-fold symmetry and crystal-like ordering.

Lead author Dr James Drewitt from the University of Bristol’s School of Earth Sciences, said: “This strikingly unexpected emergence of low configurational entropy motifs in liquid gallium at high-pressure potentially provides a mechanism for the promotion of metastable glass phases below the melting curve.

“This opens up a new avenue of research for future experimental and theoretical studies to explore rapid temperature quenched melts at high-pressure leading to the production of new metallic glass materials.”