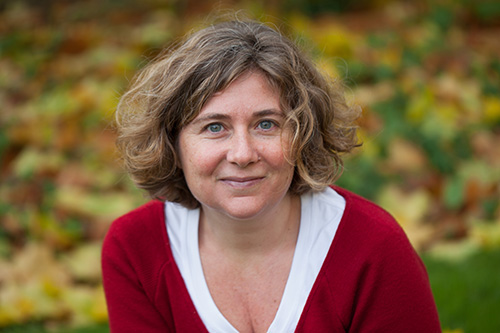 An academic from the University of Bristol's School of Cellular and Molecular Medicine has been honoured with a prestigious medal from the British Society of Cell Biology (BSCB).

Eugenia Piddini, Professor of Cell Biology and Wellcome Trust Senior Research Fellow, has been awarded the 2019 Hooke Medal in recognition of her outstanding contribution to cell biology and as an emerging leader in this field.

Professor Piddini's lab in the University's Faculty of Life Sciences studies cell competition, the interactions between cells in tissues, resulting in fit cells (winners) being able to colonise tissues as they kill and replace less-fit cells (losers).

Her group is exploring how cell competition could be used for therapeutic strategies in regenerative medicine and cancer. The labs goal is to understand the impact of cell competition on tissues and the mechanisms that cells use to compete. To achieve this the group combine two complementary approaches: studies in Drosophila, small fruit flies, to capture the complexity of these interactions in vivo, and mammalian cell culture to follow the dynamics of cell competition, including by live imaging.

Professor Piddini from the School of Cellular and Molecular Medicine, speaking about her award, said: "It is a true honour and a privilege to have been awarded this year's Hooke medal.  I am very thankful to the BSCB committee for recognising our work. This has only been possible thanks to the effort of the talented people that have gone through my group. I feel greatly energised by this recognition and look forward to continuing with even more enthusiasm our work on cell competition."

Professor Jeremy Tavare, Dean of the Faculty of Life Sciences, added: "I am delighted that Eugenia's work has been recognised in her award of the very prestigious Hooke Medal.  Eugenia's research on cell competition is pioneering and I am confident it will have a long-term impact on our understanding of the fundamental processes underlying organismal development as well as in diseases such as cancer.  This is a very proud moment in Eugenia's career as she follows an array of previous scientific stars who have won this award."

Professor Piddini originally trained in cell biology at the University of Palermo, Italy.  She completed her PhD in the lab of Carlos Dotti at the European Molecular Biology Laboratory (EMBL) Heidelberg, Germany, where she studied the regulation of cell shape by microtubule motors and Rho-like GTP-ases.

In 2002, Professor Piddini started post-doctoral work in the lab of Jean-Paul Vincent at the National Institute for Medical Research in London. Through that work Eugenia became interested in understanding how cells coordinate death and survival within tissues and this led her to work on cell competition, which has been the focus of Eugenia's research since. Eugenia started her group in 2010 at the Gurdon Institute, University of Cambridge, where she was a Royal Society University Research Fellow and in 2017 she moved to the University of Bristol.

What is the Hooke medal?
The Hooke Medal is awarded every year by the British Society of Cell Biology (BSCB) and recognises an emerging leader in cell biology.  The award is named after Robert Hooke, the eminent 17th century natural philosopher and author of Micrographia (the world’s ﬁrst comprehensive illustrated book on microscopy) and is given to an individual who has made an outstanding contribution to UK Cell Biology – until we extended the period of eligibility in May 2014 this has usually been within the ﬁrst 10 years of establishing their own lab. The medal is presented annually at the annual Spring Meeting after which the winner delivers their research talk.

The medal shows Robert Hooke’s microscope and the cork cells he ﬁrst described. It was designed by Dr Brad Amos. Since 2015, the Hooke Medal has been awarded to a cell biologist who started their own group within the last 14 years (with allowances for legitimate career breaks).