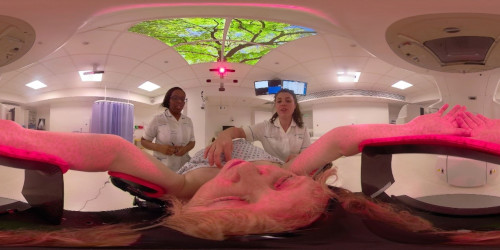 From Bristol to the big screens of Venice Film Festival, Virtual Reality film The Waiting Room, [commissioned by the Virtual Realities – Immersive Documentary Encounters research project] will be premiered at the annual event which starts today [28 August to 7 September] to a star-studded audience of cinema enthusiasts.

The Waiting Room which will be shown alongside some of the most important works of the year, is written by BAFTA winning documentary filmmaker, Victoria Mapplebeck, to document her breast cancer journey from diagnosis through to treatment and recovery.

The film is one part of the trio which makes up the multi-disciplinary research project, Virtual Realities: Documentary Encounters project, a collaboration between the University of Bristol, University of Bath and the University of West of England and funded by the Engineering and Physical Sciences Research Council [EPSRC]. The project brings together computer science, psychology and documentary studies to investigate and support the unexpected adoption of Virtual Reality within Documentary and Journalism. The commissions are contributing to the research by pushing the boundaries of nonfiction in both form and content, while also being the subject of research case studies.

Professor Cater, University of Bristol Principal Investigator said: “Virtual Reality nonfiction is an emergent and rapidly evolving new medium for filmmaking. Through Victoria’s The Waiting Room: VR commission we can explore VR’s potential, document the directorial processes of delving into VR for the first time and raise important ethical considerations.”

Victoria said: “I’m delighted to be working with such an impressive team of directors and academics, in an atmosphere that really nurtures creative and innovative approaches to immersive storytelling.”

The film has also been shortlisted to win a prize in its section (linear).

When Victoria Mapplebeck was diagnosed with breast cancer, she decided to create a film and VR project which would explore each step of her journey from diagnosis to recovery. She began with a smartphone short. Shot entirely on an iPhone X, Victoria filmed her time in waiting rooms, surgery, consultations, CT scans and chemotherapy. The Waiting Room is an unflinching portrait of the blood, sweat and tears of cancer treatment. Victoria makes visible the often invisible parts of cancer treatment, the sickness, the fatigue, the tears and the hair loss. At home she filmed with her teenage son, as they came to terms with how family life was transformed by a year of living with cancer.

The Waiting Room: VR explores the cultural myths and language of chronic illness, asking us to confront what we can and what we can’t control when our bodies fail us. “We have made cancer our enemy,” says Victoria, “a dark force to be fought by a relentlessly upbeat attitude. The Waiting Room is the antidote to the ‘tyranny of positive thinking’. It challenges the cultural myths that surround this disease, putting under the microscope the language of illness. The Waiting Room begins with a personal journey but as cancer affects one in two of us over the course of a lifetime, it also tells a very universal story.”

The lynchpin of this VR piece is a 9-min durational 360 take, a reconstruction of Victoria’s last session of radiotherapy, which marked the end of nine months of breast cancer treatment.  This experience is counter balanced by a CGI journey inside Victoria’s body. Working with 3D artists, Victoria has bought to life the medical imaging she’s collected through out treatment. Cancer cells, CT scans, mammograms and ultrasound provide a 3D portrait of her body from the inside, out.

The film was broadcast on The Guardian as part of their documentaries strand with the second part, Victoria’s first foray into Virtual Reality, receiving its premiere at the 76th Venice International Film Festival from 28 August to 7 September, 2019. The Waiting Room film and VR project will tour festivals, exhibitions and hospitals throughout 2019- 20.

Funded by the Engineering and Physical Sciences Research Council (UK EPSRC EP/P025595/1), Virtual Realities is a collaboration between the University of Bristol, University of Bath and UWE Bristol (the University of the West of England), in partnership with Watershed, BBC, the Guardian, Aardman Animations, VRCity, Jongsma + O’Neill, Archer’s Mark, VRTOV and MIT Open Documentary Lab.

The Virtual Realities - Immersive Documentary Encounters is a collaborative research project that seeks to examine the production and user experience of non-fiction virtual reality content. Through a process of investigation, dialogue, and shared findings, researchers from human-computer interaction, psychology and documentary studies are working alongside internationally recognised creative industry collaborators to support the development of this new production sector, keeping the interests of audience and subjects to the fore.

So far, the research has involved the creation of a VR Mediography, an online interactive timeline documenting where nonfiction VR production has come from, where the current state of the art lies and how technology and creative form are developing. A production study involving leading international producers is capturing approaches to storytelling, emerging business models and ethical concerns in this emerging 360 medium. Lab-based psychological studies and an ethnographic household study are probing engagement, attention, understanding and emotional reaction to immersive nonfiction media content.