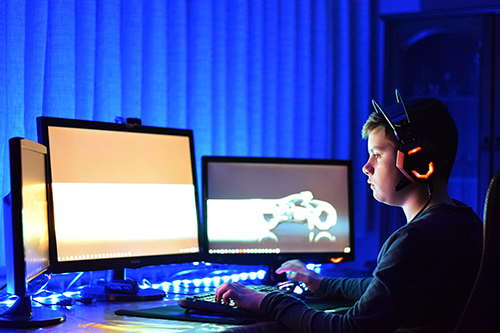 Over a quarter of those engaging with esports betting tweets are children under the age of 16, according to a new report which suggests esports gambling may be as attractive to children as the computer games themselves.

Conventional bookmakers are now offering esports odds in response to the growing popularity of professional competitive playing of computer games, as illustrated by the first ever Fortnite World Cup in America which had a $30 million prize fund.

New research, published today [20 August] by Demos and the Department of Management at the University of Bristol, reveals 28 per cent of those retweeting or replying to esports betting tweets in the UK are children under 16.

This is over five times the amount responding to traditional bookmakers (five per cent). The figure rises to a staggering 45 per cent for esports worldwide.

The Biddable Youth report (PDF, 1,656kB), which explores this new field of gambling online, analysed over 888,000 betting-related tweets over a period of nine months in 2018.

Showing a person under 25 in a gambling advert is against regulations – but as most professional esports players are in this age bracket the rules are flouted again and again.

Parents and teachers are likely to be completely unaware of gambling advertising on social media as, through the use of cryptocurrencies, children may be able to place bets without access to a bank account.

In order to tackle these problems, the report is calling for technology companies to make better use of age verification tools and adtech to screen out children from gambling ads, and for regulators to both continue to pursue those breaking the rules and consider tightening regulations.

The report’s further recommendations include:

Professor Agnes Nairn, from the University of Bristol's Department of Management and co-author of Biddable Youth, said: "We were really surprised at the number of children actively engaging with esports gambling accounts.  Yet with the massive growth in the esports industry, unless action is taken, we can only expect this figure to rise as sports and gambling seem to be inextricably linked.

"Our in-depth analysis of the content of gambling advertising Tweets leads us to believe that children’s esports gambling is currently under the radar in two ways: it's online where parents won’t see it and it’s using clever content marketing such as amusing GIFS, memes, pictures and funny stories, designed to appeal to and implicitly influence young people."

Josh Smith, Senior Researcher in the Centre for the Analysis of Social Media and Biddable Youth co-author, said: "This report explores a vital new field of gambling online, which encourages people to bet on the outcome of video games.

"We found that high volumes of messages are produced to appeal particularly to children, with thousands of children in the UK following and responding to this content. This report also shows that advertising regulations are being regularly flouted by gambling advertisers online.

"We hope this report serves as a call to action - both to technology companies to make it easier for gambling customers to get a clear picture of what they’re getting into, and to regulators who must continue to ensure that these new actors are compliant with regulation."

Marc Etches, CEO of GambleAware, said: "One in eight 11 to 16-year-olds are following a gambling company on social media. This figure, coupled with this new report into esport betting, shows a need for technology companies to strengthen the age verification processes on social media platforms to help protect children and young people from this sort of exposure to gambling content online. It also brings to light the need for clearer and more regular messages about the risks of gambling to be displayed on gambling adverts online."

Esports is the industry surrounding the professional competitive playing of computer games (mostly ego-shooters such as Counter Strike and Call of Duty).  Its market size was $906 million in 2018 and is forecasted to reach $1.65 billion by 2020.

Regular tournaments around the world feature individuals or multiplayer-teams duelling each other for prize pools up to £24 million. Mass live venues such as the Royal Opera House in London attract thousands of live spectators and global audience reach is 451 million people with top tournaments attracting more than 60 million viewers – most of them young people and children.

The esports betting market is predicted to be worth almost $30 billion by 2020.

'Biddable Youth. Sports and esports gambling advertising on Twitter: Appeal to children, young and vulnerable people' by Josh Smith, Centre for Social Media Analysis at Demos and Agnes Nairn, Department of Management at the University of Bristol.

The research was funded by Gamble Aware as part of a consortium led by Ipsos MORI to carry out research into the effects of gambling marketing and advertising on children, young people and vulnerable adults.