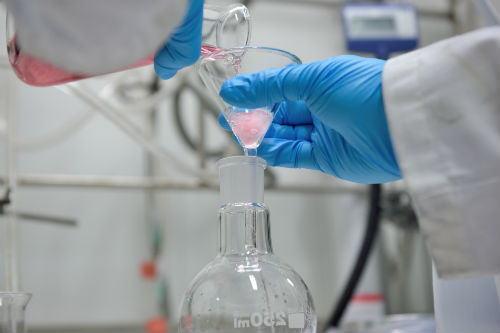 Amino acids are the building blocks of proteins, and modifying amino acids chemically allows scientists to develop new molecules that can provide the starting point for developing new medical treatments such as antibiotics.

Scientists in the University of Bristol's School of Chemistry have now invented a new way to modify amino acids by attaching a ring of carbon atoms at the very centre of the amino acid molecule.

The unusual reaction that introduces this new ring was previously of limited application, but the Bristol work, published today in the journal Nature and funded by the EPSRC and by the EU through the European Research Council, showed that introducing new molecular structural features makes it compatible with a much wider range of chemical structures than previously suspected.

For example, it is now possible to add rings that also carry a whole range of other atoms around their periphery.

The reaction involves the migration of the ring from the nitrogen atom of the amino acid to a carbon atom, and because amino acids exist in two mirror image forms, importantly it retains a memory of the starting mirror image structure in the structure of the product.

The chemistry is also very easy to carry out on large scale, making it potentially very valuable for the practical synthesis of new drug molecules.

Professor Jonathan Clayden said “This work has allowed us to turn what was a scientific curiosity into a really practical new way of making an important new group of chemical building blocks.