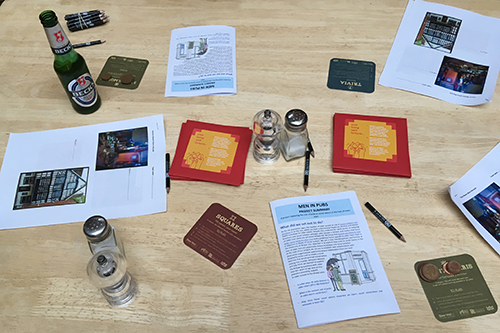 Specially-designed beermats have been created to highlight the important role traditional pubs have to play in tackling loneliness in older men.

As traditional pubs decline, and face-to-face socialising is replaced by social media, researchers at the University of Bristol have examined the role pubs play in the lives of men over 65.

They found that older men still see the pub as a central point in the community, although the rising cost of drinks means more people are drinking at home in isolation.

Featuring trivia questions and games, the new beermats – called Beermat(es) – have been devised with games designer Mufti Games and will appear in pubs across Bristol soon.

Their design is based on feedback from pub-goers and are aimed specifically at men, who are more likely to experience social isolation in older age than women (Independent Age research).  Recent figures show 14 per cent of older men experienced moderate to high social isolation compared to 11 per cent of women.

Researchers from the University's Brigstow Institute, wanted to better understand how pubs can potentially tackle this problem.

Dr Paul Willis, from the School for Policy Studies, led the research. He said: "As the UK population ages, the number of older people at risk of social isolation and loneliness is on the rise, which can have a detrimental impact on physical and mental health outcomes for older adults.

"The findings have helped us to develop beermats which will be distributed across the city to promote conversation and face-to-face social interactions, which we know are so vital to combat feelings of isolation."

They held workshops and a focus group with older men, pub landlords and community support services over a six-month period.

A key finding was that men's reasons for going to the pub were much broader than just drinking alcohol, rather they wanted to interact with other people; to get out of the house and break their daily routine (for those living on their own); to enjoy live music with others; and as a reward in the working week.

The changing nature of pubs was also outlined, with higher prices, fewer social activities and louder music to make older men less likely to access pubs. Men felt it was no longer acceptable to 'nurse a pint' if you were unable to afford multiple drinks.

Landlords and pub owners were identified as having an important role to play in creating a social space where people felt welcome.

The men's group felt that it was the role of the landlord to get to know their frequent customers and provide a point of regular social interaction, particularly for pub-goers who may be experiencing loneliness.

However, many pubs are now being run by bigger companies rather than landlords, and this can mean frequent changes of staff who do not know their clientele on first name basis.