Welcome back, lad! Gromits return to the University 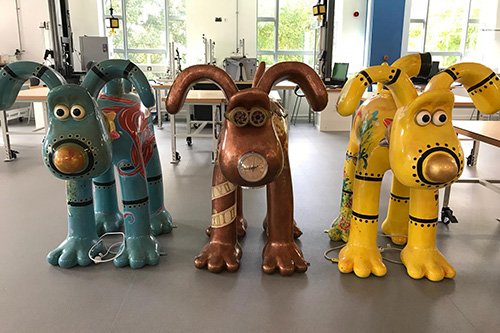 The trio of Gromits back in the Faculty of Engineering

Three of the hugely popular Gromit sculptures which adorned the city this summer will return to the University of Bristol, helping to raise £1.62 million for Bristol’s Children Hospital.

Following last night's auction, the University is pleased to announce that 'A Grand Gromplication', 'Oceans 1: Deep Blue' and 'Oceans 2: Yellow Sub' will now reside in the Faculty of Engineering where they were created.

The University of Bristol was one of the 'trailblazer' sponsors, alongside Creditcall, Renishaw and Rolls-Royce, playing a significant role in making the trail the most innovative of its kind.

The two ocean-inspired Gromits will now reside in the Merchant Venturers Building, home of the University’s School for Computer Science, Electrical and Electronic and Engineering Mathematics, and at a new University-occupied space ahead of the new Temple Quarter Enterprise Campus opening in 2021/22. The sculptures will actively connect the two sites through the power of wireless communications.

They are already among the most pioneering sculptures created - able to communicate with each other live from their two locations thanks to wireless video streaming technology devised by the Communication Systems & Networks (CSN) Group.

The third Gromit, 'A Grand Gromplication', is a clock-inspired sculpture designed by Engineering students Christine Braganza, Ella Allan and Octavia Clark and built by the Faculty's technical services team.

It has six interactive parts and is a nod to the little-known historical fact that Bristol used to be 10 minutes behind London until 1844 when times needed to be aligned to avoid confusion over railway timetables.

His name is a pun on the term 'grand complication' which describes fancy and intricate watches. The 5ft sculpture will now live in the Queen’s Building, home to the School of Civil, Aerospace and Mechanical Engineering.

A fourth sculpture, 'ThermoGromit' - hot pink and covered in handprints which change colour when touched - sold for £16,000 at last night's auction. He was created by PhD student Kacper Sokol, who worked with artist Timmy Wilmott on the design.

The University's partnership with Wallace & Gromit's Grand Appeal has been coordinated by the Faculty of Engineering's Industrial Liaison Office (ILO), which helps students and researchers to work closely with industry and business.

Along with creating four Gromit sculptures, students from the Computer Science Department also helped to develop the Gromit Unleashed 2 app which has been downloaded by thousands of people throughout the summer.

In addition, the Bristol Interaction Group at the University of Bristol worked with Large Visible Machine, an independent mobile platforms game studio, to create the 'Gromit Unleashed 2 VR Experience' which allowed patients at Bristol Children's Hospital to experience the sculpture trail without leaving the hospital.

The University donated 100 specially designed Google Cardboard headsets and has provided two Google Pixel phones for patients without access to a smart phone. Through virtual reality technology, patients are transported to the streets of Bristol to see the sculptures up close and personal in a live setting with the use of 360 camera technology.

Colin Dalton, Undergraduate Education Director in the Faculty of Engineering at the University of Bristol, said: "It's been fantastic to work with the Grand Appeal so closely and to play a part in what’s been a brilliant sculpture trail. We're proud that our input and expertise has pushed new boundaries and helped to make it the most innovative trail to-date.

"Above all, it's incredible that Gromit Unleashed 2 has raised such a phenomenal amount of money for Bristol Children's Hospital and been so enjoyable for so many people this summer.

"To be welcoming back three of the Gromits to the University is fantastic and we hope they will continue to inspire and entertain students and staff."

In addition to the work carried out by staff and students in the Faculty of Engineering, experts within the NIHR Biomedical Research Centre have also worked with the Grand Appeal to incorporate a mini healthy living quiz into the trail. The results will give valuable insights into the public’s knowledge of nutrition and will be used by The Grand Appeal and University of Bristol research dietitians, who work with families in Bristol Children’s Hospital, in future research.