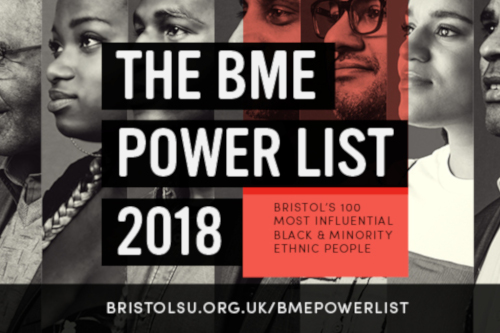 The Bristol BME Powerlist has been revealed today, marking the start of Black History Month. The list names Bristol’s 100 most inspiring and influential Black and Minority Ethnic People, as nominated by members of the Bristol community.

Among those featured are civil rights campaigner Dr Paul Stephenson, performer Vanessa Kisuule and Lara Lalemi, student at the University of Bristol.

The Bristol BME Powerlist has been 18 months in the making and is a joint partnership between the University, Bristol Students’ Union and Bristol 24/7 to showcase the diverse city of Bristol.

The campaign to find nominees was launched in January 2018 and ended with 500 inspiring nominations of incredible BME people from the Bristol community.

The Bristol BME Powerlist campaign has since been nominated for the Diversity Marketing Campaign of the Year at the Inclusive Companies Awards.

A panel of ten judges were assigned the task of drawing 500 nominations down to a shortlist of nine categories to form the final BME Powerlist.

“BSWN is delighted and proud to be supporting the BME Powerlist initiative, aimed at celebrating Black excellence in the city by providing role models for the next generation to motivate and inspire them. Furthermore, the list demonstrates the diverse talents that exist within the community that often goes unnoticed. It has been a great honour to be part of the judging panel.”

The motivation behind the list is to improve links between students and the wider Bristol community, and to provide students with more visible BME role models to inspire them in their own careers, activities and engagement with the city.

“Working on the BME Powerlist has (after my degree) definitely been my greatest achievement whilst studying at University of Bristol. The BME Powerlist was a necessary and powerful way of recognising the unsung heroes and gamechangers that make Bristol such an incredible place to live, work and study.”

The Powerlist has been printed and distributed by Bristol 24/7 and is now available across the city. You can also view the full list online at www.bristolbmepowerlist.com

Everyone named on the list, panel judges and members of the city are invited to an event on Saturday 27th October to engage in conversations with students and increase BME engagement in local communities. Tickets can be booked online.

The Bristol BME Powerlist is a student-led project brought to the city by the University of Bristol, Bristol SU and Bristol 24/7. The list aims to showcase Bristol’s 50-100 most inspiring, successful and influential Black and Minority Ethnic People. Nominations were opened at the start of 2018.

The motivation behind the list is to improve links between students and the wider Bristol community, and to provide students with more visible BME role models to inspire them in their own careers, activities and engagement with the city.

Those named on the list will be asked to engage in conversations with students to increase BME engagement in the local communities. This will help to develop their time in Bristol and to create an improved sense of social responsibility within the city.