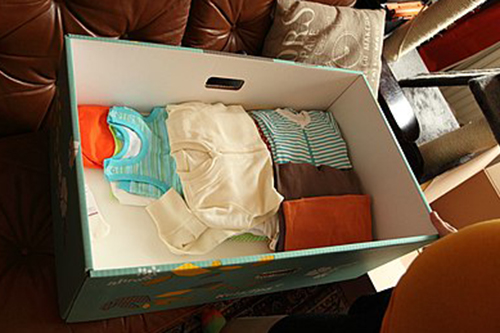 Cardboard baby boxes are being promoted for infant sleep as a safe alternative to more traditional cots, bassinets, or Moses baskets, without any evidence in place, warn experts from the Universities of Bristol and Durham and published in The BMJ.

In a letter to the BMJ journal, Professor Peter Blair at the University of Bristol and colleagues argue that, without supporting evidence, “the cardboard baby box should not be promoted as a safe sleeping space, but as only a temporary substitute if nothing else is available.”

They call for high-quality studies “to better understand how families use the cardboard baby box and its safety implications.”

In Finland, cardboard baby boxes have routinely been given to every expectant mother since the 1930s. They come with a mattress that fits into the bottom of the box, and are said by some to have helped cut cot deaths (SIDS). Boxes are now being given out free to new mothers in some parts of the UK.

But Blair and colleagues argue that there is no evidence that these boxes reduce cot deaths (SIDS rates are equally low in neighbouring countries, such as Sweden and Denmark, where boxes are not provided), and they question whether they meet safety standard regulations.

They point out that cots (with their bars and raised surface) and bassinets or Moses baskets (with low sides) allow infants to be easily seen by parents and may also facilitate air flow, whereas the cardboard box (with its higher opaque sides) does not - carers can see the infant only if they are looking from directly over the box to make sure their child is safe.

The cardboard baby box has other potential problems, they say. For example, some of the boxes come with lids, are potentially flammable (especially if not laminated), and if placed on a floor are susceptible to low level draughts, domestic pets, and young siblings.

If placed at a height, the box may fall, and no data exist on the durability of the box (especially if it becomes wet or dirty), they add.

Furthermore, they are too small to be used for most babies older than three-months old, and are not designed to be brought into their parents’ bed at night, so offer no better alternative to bed sharing than the cot, bassinet, or Moses basket.

“We support any initiative that raises awareness of SIDS, including appropriate SIDS risk reduction advice distributed with cardboard baby boxes,” write the authors. “But this advice can be undermined if the messages given are incorrect or mixed with non-evidence based messages about the intervention itself.”

“Population-wide initiatives should have to meet high standards of safety and efficacy and should be subject to rigorous evaluation before implementation, because the potential to cause inadvertent and unintended harm is much greater than for those that target a selected population,” they conclude.

Letter: Concerns about the promotion of a cardboard baby box as a place for infants to sleep by is published in the The BMJ.