£1.6 million study will determine how bone size, shape and structure contributes towards arthritis and other musculoskeletal diseases 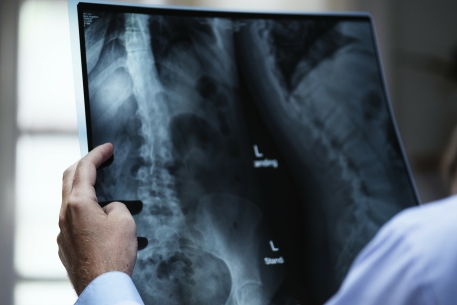 How the size, shape and structure of bones and joints contribute towards the development of common age-related diseases such as osteoarthritis and osteoporosis will be investigated by an international research team thanks to a £1.6 million Wellcome Trust award.

Musculoskeletal disorders are a leading cause of disability in the UK's rising aging population, primarily due to low back pain, fractures and diseases such as osteoarthritis. The total cost of joint replacement and hip fracture surgery is approaching £9.5 billion annually and represents a major burden on society and the NHS. The study is intended to reduce the impact of these common musculoskeletal disorders by providing a basis for improved means of disease prediction, prevention and treatment.

The study, led by Jon Tobias, Professor of Rheumatology at Bristol Medical School, will involve a collaboration between researchers from Bristol, Manchester, Southampton, Aberdeen, Cardiff and Queensland universities.

Using a combination of scans and genetic data from around 100,000 40-to-69-year-old men and women who were recruited to the UK biobank study, the team will explore how the size, shape and structure of hips, knees and spines contribute to the development of fractures, osteoarthritis and back pain. The findings will then be used to develop novel strategies for identifying those at risk, slowing disease progression and treating those with established disease.

Professor Tobias said: "The sheer scale of UK Biobank in terms of the number of participants involved and detailed amount of information collected represents a unique resource for the international research community. This study will help us to realise the potential of UK Biobank for understanding the causes of common diseases and reducing their impact on health, through investigation of the role of size, shape and structure of bones and joints in the development of common musculoskeletal conditions."

About the Wellcome Trust
The Wellcome Trust exists to improve health for everyone by helping great ideas to thrive. We’re a global charitable foundation, both politically and financially independent. We support scientists and researchers, take on big problems, fuel imaginations and spark debate.

The study has been awarded one of the first Wellcome Trust's Collaborative Awards in Science, which promotes the development of new ideas and speed the pace of discovery. The award funds teams of researchers, consisting of independent research groups, to work together on the most important scientific problems that can only be solved through collaborative efforts.

About UK Biobank
UK Biobank is a major national and international health resource, and a registered charity in its own right with the aim of improving the prevention, diagnosis and treatment of a wide range of serious and life-threatening illnesses – including cancer, heart diseases, stroke, diabetes, arthritis, osteoporosis, eye disorders, depression and forms of dementia. UK Biobank recruited 500,000 people aged between 40-69 years in 2006-2010 from across the country to take part in this project. They have undergone measures, provided blood, urine and saliva samples for future analysis, detailed information about themselves and agreed to have their health followed. Over many years this will build into a powerful resource to help scientists discover why some people develop particular diseases and others do not.