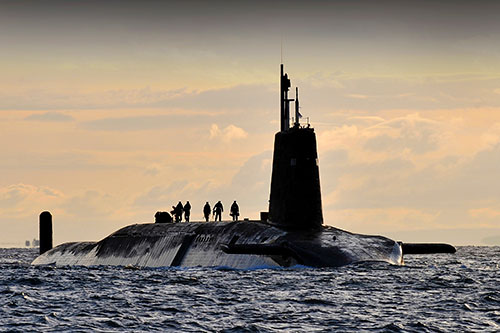 The UK Government should use the current decision on replacing Trident to encourage a serious public debate about the UK’s nuclear status, leading academics have said. Researchers from the universities of Bristol and Birmingham, and King’s College London, argue in a new report that a decision to go ahead with replacing Trident would commit the UK to nuclear weapons for the foreseeable future, at a time when anti-nuclear voices in mainstream British politics are at their strongest in a generation.

Nuclear weapons have been a cornerstone of British defence, security and foreign policy since the early 1950s. However, the UK’s fleet of nuclear submarines is coming to the end of its service life, and, if it is to be renewed, the manufacture of replacements must begin soon.

Professor Timothy Edmunds, director of the Global Insecurities Centre at the University of Bristol, said: ‘With the election of Jeremy Corbyn, and the rise of the Scottish National Party, the decision of whether to retain the UK’s nuclear status is unusually open and contested, with implications and effects that will be generational in scope. That decision will be made in 2016.

‘Nuclear weapons possession is often seen as a prerequisite for UK influence in the international arena. But there may also be significant international moral and political capital for the UK in a conscious decision to abandon its nuclear weapons status, in the non-proliferation process and elsewhere.’

The researchers also argue the decision should consider the overarching global security landscape, the threats it presents, and UK’s role within it.

Professor Edmunds said: ‘Traditionally, a nuclear weapons capability is seen as a deterrent to adversaries. But in the present environment, the prevalence of non-state adversaries and transnational security threats raises difficult questions about who is to be deterred, or influenced, by nuclear weapons, how and to what end. Of course, that’s the situation we face now. It may be wrong to rule out renewed significance for deterrence in the long term.

‘The Trident debate, therefore, also relates to the wider debate about the UK’s global role – about the risks and burdens it is willing, and equipped, to take on. The Government must make these considerations explicit in the wider discussions around Trident renewal.

‘Of course, the debate cannot ignore the financial implications of renewal, particularly during a prolonged period of government austerity,’ Professor Edmunds added. ‘The cost of retaining nuclear capability is an important factor, and the Government needs to be clearer about the trade-offs involved in any decision to renew Trident, particularly regarding cuts to UK conventional military forces. They must go beyond boilerplate discussions of deterrence and insurance policies and focus on specific questions of utility and vulnerability, including lessons from the past and likely strategic futures.’

The Policy Bristol briefing ‘Trident Renewal: ‘Strategic utility and trade-offs must be made explicit’ is available to download.