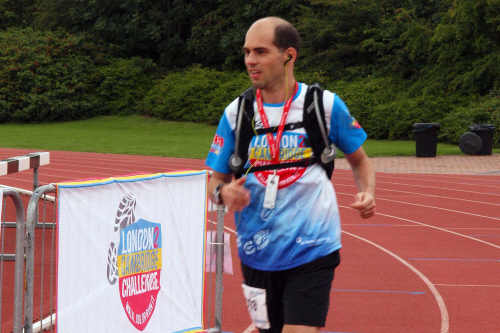 A Bristol man has run at least 5km everyday throughout 2015, fulfilling a personal challenge and raising over £2,500 for charity. Richard Harris, a Professor of Quantitative Social Geography at the University of Bristol, has not only completed the challenge but he’s averaged 11km a day thanks to completing a number of marathons and ultra-marathons.

The challenge was finished in style with a 70km run on New Year’s Eve, bringing his overall tally to 4092km over 365 days.

He decided to undertake the year-long pledge to raise money for Mind in recognition of their work to support those with mental health problems.

Richard, 42, said: "In my role as senior tutor, I see an increasing number of students with mental health issues. That's why I chose to raise money for Mind, which does great work supporting those with and raising awareness about mental health problems."

His love of running began relatively recently, when he took it up three years ago in response to his own periods of depression. Now, he's qualified for next year's London Marathon due to achieving a good time for his age group.

Among the races Richard's completed this year is the 100km ultra-marathon from London to Cambridge at the end of August.

He's also taken part in the Bath Half marathon, the Green Man ultra-marathon around Bristol and the Bristol to Bath marathon in which he got a new personal best despite of the hills.

Richard, who even squeezed in a run around Central Park while on holiday in New York over Christmas, added: "My legs are tired and I have a bit of niggle in my left shin. But the support from staff, students and friends has been overwhelming and that got me to the finish."

He's also been supported by a community of people taking part in the Kx365 Challenge, which encourages people to take part in some form of exercise every day for a year.

To sponsor Richard, please see his JustGiving page or read more about his challenge on Facebook.