Ants respond to social information at rest, not on the fly 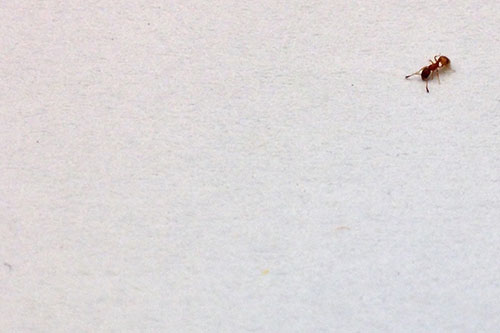 Ants don’t get easily distracted by social information when on the move, only fully responding to it when at rest, a new study from the University of Bristol indicates. Such sporadic monitoring of the social environment may reduce information overload and enhance the robustness of complex societies, the researchers suggest.

Edmund Hunt, a PhD student in Bristol’s School of Biological Sciences, and colleagues tracked the movement patterns of lone rock ants (Temnothorax albipennis) exploring a large arena outside the nest, both when the arena was clean and when it contained chemical information (pheromones or other cues) left by previous nest-mates.

The researchers discovered a relationship between the duration and average speed of an ant’s movements, and also established that movements mostly fluctuated around a constant average speed.  The average speed increased in anticipation of a longer movement, suggesting that movement durations were somehow determined in advance.

This was the case both when chemical information was absent and when it was present, suggesting ants probably only fully respond to social information in between movements.

Edmund Hunt said: “An intermittent response to social information would help the individual ant by reducing the burden of information it has to process when moving around in its crowded society. It could also benefit the colony as a whole by moderating positive feedback effects, which may otherwise propagate social information of poor quality through the system.  This would compromise the effectiveness of the ants’ decentralized task allocation system.

“Such intermittent responsivity to aspects of the social environment during movement may have implications for the way we understand other complex adaptive social systems, including human ones.”

The research is published today in Royal Society Open Science.