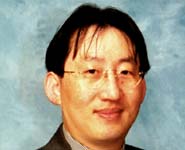 Professor Kei Cho, Chair of Neuroscience in the University’s School of Clinical Sciences, has received one of the Royal Society’s most prestigious awards, a Wolfson Research Merit Award.

Professor Kei Cho, Chair of Neuroscience in the University’s School of Clinical Sciences, received the award for his work on synaptic plasticity and pathology in the brain.

Professor Cho’s recent findings suggest that inhibiting synapse weakening, so called long-term depression (LTD), can restore normal synaptic function in an Alzheimer’s disease-pathology model.  This supports the hypothesis that long-term potentiation (LTP), an opposite effect of LTD, is impaired in Alzheimer’s disease as a result of enhanced LTD signalling.

The research suggests that if one form of plasticity is aberrantly enhanced, the mutual exclusivity of LTP and LTD could underlie synaptic dysfunction in Alzheimer’s disease.  These findings provide a potential translation for the understanding and treatment of Alzheimer’s disease.

The awards are given by the Royal Society ‘to individuals of proven outstanding ability to undertake independent, original research’.  Professor Cho is one of 18 scientists from institutions across the UK who has received the award.

Jointly funded by the Wolfson Foundation and the Department for Business, Innovation and Skills (BIS), the Royal Society Wolfson Research Merit Award scheme aims to provide universities with additional support to enable them to attract to this country or to retain respected scientists of outstanding achievement and potential.  The scheme provides up to 5 years’ funding after which the award holder continues with a permanent post at the host university.

The Royal Society is the UK’s national academy of science. Founded in 1660, the Society has three roles, as a provider of independent scientific advice, as a learned Society, and as a funding agency. Our expertise is embodied in the Fellowship, which is made up of the finest scientists from the UK and beyond. Our goals are:

· Invest in future scientific leaders and in innovation;
· Influence policymaking with the best scientific advice;
· Invigorate science and mathematics education;
· Increase access to the best science internationally;
· Inspire an interest in the joy, wonder and excitement of scientific discovery.