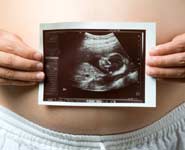 New research by academics at the University of Bristol hopes to explain premature births and failed inductions of labour.

The study by academics at the University of Bristol suggests a new mechanism by which the level of myosin phosphorylation is regulated in the pregnant uterus.

The researchers, Dr Claire Hudson and Professor Andrés López Bernal in the School of Clinical Sciences and Dr Kate Heesom in the University Proteomics Facility and the School of Biochemistry, have discovered that phosphorylation of uterus proteins at specific amino acids have a key role in the regulation of uterine activity in labour.

A remarkable feature of the uterus (the womb) is that it remains relatively relaxed for the nine months of pregnancy, carrying the baby safely, and then, during labour, it contracts forcibly and the baby is born.  A special type of smooth muscle that grows and stretches during pregnancy to accommodate the fetus and the placenta forms the uterus.

Hormones such as oxytocin or prostaglandins promote labour, but the biochemical changes that allow the switch from relaxation to contractions to happen are not fully understood.  This makes it difficult to predict when a woman is going to deliver.  In eight to ten per cent of women delivery occurs too early (preterm labour, before 37 weeks’ gestation) and prematurity is associated with major risks for the baby.  On the other hand when labour has to be induced for medical reasons, it is impossible to know whether the induction will be successful or whether it will require an emergency caesarean section with risks for the mother and baby.

Using small biopsies of uterine tissue from women who delivered at St Michael’s Hospital, Dr Hudson has demonstrated that contractions require both a calcium dependent pathway driven by myosin kinase and a calcium independent pathway that regulates the activity of myosin phosphatase. Additionally, Dr Hudson has pinpointed precisely the position of the amino acids in myosin and myosin phosphatase that are phosphorylated during cycles of contraction and relaxation of uterine smooth muscle.

Dr Claire Hudson said: “This study has increased our understanding of the biochemical changes underlying uterine activity and may help in the design of better drugs to prevent preterm labour or to induce labour successfully at term, benefiting many thousands of women and their babies.”

Andrés López Bernal, Professor of Human Reproductive Biology, added: “Our research will lead to better control of labour, whether stopping or starting it and it could be extended to the study of the non-pregnant uterus to improve our understanding of menstruation and to identify alterations responsible for painful periods or excessive menstrual blood loss.”

Alterations in the kinase/phosphatase equilibrium and its regulation by calcium can make the uterus more sensitive to oxytocin and other hormones that trigger labour and provoke preterm birth.  On the other hand, alterations that favour relaxation may make the uterus contract poorly and result in failed induction of labour.

The work was funded by a grant from the Wellcome Trust.