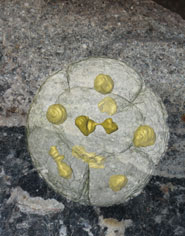 570 million year old multicellular spore body undergoing vegetative nuclear and cell division (foreground) based on synchrotron x-ray tomographic microscopy of fossils recovered from rocks in South China. The background shows a cut surface through the rock - every grain (about 1 mm diameter) is an exceptionally preserved gooey ball of dividing cells turned to stone.

Evidence of the single-celled ancestors of animals, dating from the interval in the Earth’s history just before multicellular animals appeared, has been discovered in 570 million-year-old rocks from South China by researchers from the University of Bristol, the Swedish Museum of Natural History, the Paul Scherrer Institut and the Chinese Academy of Geological Sciences.

All life evolved from a single-celled universal common ancestor, and at various times in Earth history, single-celled organisms threw their lot in with each other to become larger and multicellular, resulting, for instance, in the riotous diversity of animals.  However, fossil evidence of these major evolutionary transitions is extremely rare.

The fossils, reported this week in Science, preserve stages in the life cycle of an amoeba-like organism dividing in asexual cycles, first to produce two cells, then four, eight, 16, 32 and so on, ultimately resulting in hundreds of thousands of spore-like cells that were then released to start the cycle over again.  The pattern of cell division is so similar to the early stages of animal (including human) embryology that until now they were thought to represent the embryos of the earliest animals.

The researchers studied the microscopic fossils using high energy X-rays at the Swiss Light Source in Switzerland, revealing the organisation of the cells within their protective cyst walls.  The organisms should not have been fossilized – they were just gooey clusters of cells – but they were buried in sediments rich in phosphate that impregnated the cell walls and turned them to stone.

Lead author Therese Huldtgren said: “The fossils are so amazing that even their nuclei have been preserved.”

Co-author Dr John Cunningham said: “We used a particle accelerator called a synchrotron as our X-ray source.  It allowed us to make a perfect computer model of the fossil that we could cut up in any way that we wanted, but without damaging the fossil in any way.  We would never have been able to study the fossils otherwise!”

This X-ray microscopy revealed that the fossils had features that multicellular embryos do not, and this led the researchers to the conclusion that the fossils were neither animals nor embryos but rather the reproductive spore bodies of single-celled ancestors of animals.

Professor Philip Donoghue said: “We were very surprised by our results – we’ve been convinced for so long that these fossils represented the embryos of the earliest animals – much of what has been written about the fossils for the last ten years is flat wrong.  Our colleagues are not going to like the result.”

Professor Stefan Bengtson said: “These fossils force us to rethink our ideas of how animals learned to make large bodies out of cells.”

Therese Huldtgren is a doctoral student at the Department of Palaeozoology, Swedish Museum of Natural History, and Stockholm University, Stockholm, Sweden.

Dr John Cunningham is a Research Associate at the School of Earth Sciences, University of Bristol, UK.

Professor Chongyu Yin is a Researcher at the Institute of Geology, Chinese Academy of Geological Sciences, Beijing, China.

Professor Marco Stampanoni is Head of X-ray Tomography at the Paul Scherrer Institute, Villigen, Switzerland and Assistant Professor for X-ray Microscopy at the Department for Information Technology and Electrical Engineering of ETH Zürich, and Institute of Biomedical Engineering of the University of Zürich and ETH Zürich.

Professor Philip Donoghue is Professor of Palaeobiology in the School of Earth Sciences, University of Bristol, UK