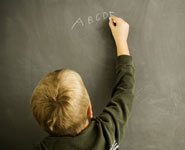 Babies born between 32 and 36 weeks (‘late-preterm’) make up 82 per cent of all premature births and six per cent of all live births in the UK and are generally considered to be in the ‘safe zone’ of premature births. But this vulnerable group requires closer attention to ensure they receive adequate educational support, according to researchers from Children of the 90s at the University of Bristol, whose findings are published online in the journal Archives of Disease in Childhood.

Previous research has shown that premature babies are more at risk of developmental delay, cerebral palsy and learning difficulties but little has been known until now about how well late-preterm babies in the UK fare at school compared to babies born at full term.

Of the 734 late-preterm infants in the study, 111 (15 per cent) were born at 32-33 weeks and 623 (85 per cent) were born at 34-36 weeks. The majority were from a white ethnic background, had lower birth weights and lengths, and were more likely to be male (57 per cent compared to 51 per cent of babies born at full term). Additionally the late-preterm babies were more likely to be from a multiple pregnancy (19 per cent vs 2 per cent) and born by Caesarean section (23 per cent vs 10 per cent). Mothers of late-preterm infants tended to have fewer qualifications and lower incomes. Even after adjusting for the background differences between late-preterm and full-term children, there was still a significant difference in school assessment results at age seven.

The findings of this study agree with previous research suggesting poorer school outcomes in late-preterm infants and add to an emerging evidence base of poor long-term neurological and developmental outcomes among children born late-preterm.

Speaking about the findings, the report’s main author Dr Philip Peacock said: ‘Given that children born late-preterm make up the majority of all preterm births, and comprise around six per cent of the population, this group warrants more recognition and surveillance than is currently provided. We recommend children born late-preterm receive a “school readiness” and educational assessment prior to starting school to help identify potential learning problems. Early intervention within this vulnerable group of children may help reduce the burden of school problems and their associated consequences.’