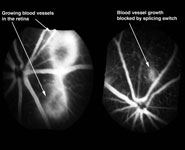 Scientists have discovered a new way to target cancer through manipulating a master switch responsible for cancer cell growth. The findings, published today [12 Dec] in the journal Cancer Cell, reveal how cancer cells grow faster by producing their own blood vessels.

Scientists have discovered a new way to target cancer through manipulating a master switch responsible for cancer cell growth. The findings, published today [12 Dec] in the journal Cancer Cell, reveal how cancer cells grow faster by producing their own blood vessels.

Cancer cells gain the nutrients they need by producing proteins that make blood vessels grow, helping deliver oxygen and sugars to the tumour. These proteins are vascular growth factors like VEGF — the target for the anti-cancer drug Avastin. Making these proteins requires the slotting together of different parts of genes, a process called splicing.

Scientists at UWE Bristol and the University of Bristol discovered that mutations in one specific cancer gene can control how splicing is balanced, allowing a master switch in the cell to be turned on. This master switch of splicing makes cancer cells grow faster, and blood vessels to grow more quickly, as they alter how VEGFs are put together.

In experimental models, the researchers found that by using new drugs that block this master switch they prevented blood vessel growth and stopped the growth of cancers.

Dr Michael Ladomery spearheading the work from UWE Bristol, said: “The research clearly demonstrates that it may be possible to block tumour growth by targeting and manipulating alternative splicing in patients, adding to the increasingly wide armoury of potential anti-cancer therapies.”

Professor David Bates who led the team from the University of Bristol’s School of Physiology and Pharmacology, said: “This enables us to develop new classes of drugs that target blood vessel growth in cancer and other diseases like blindness and kidney disease.”

The work, which started on kidney cancer, also involved groups at Southmead Hospital, where patients with kidney disease helped by allowing tissues that had been removed during surgery to be used in the research.

Professor Steve Harper, Consultant Nephrologist and part of the research team, said: “This shows how important it is for patients, doctors and scientists to come together in an excellent environment like Bristol to make these groundbreaking discoveries.”

Professor Moin Saleem, Consultant Pediatric Nephrologist, whose lab helped to make the cells used, added: “We are really grateful to the patients who allowed their cells to be used in this research, as we hope it will eventually help the development of new drugs.”

The paper, entitled ‘WT1 mutants reveal SRPK1 to be a downstream angiogenesis target by altering VEGF splicing’, is published in Cancer Cell.  The research was sponsored by a UWE Bristol Faculty PhD studentship, which funded Elianna Amin, the first author on the paper, and by University of Bristol research grants from the British Heart Foundation, Cancer Research UK, Wellcome Trust, Medical Research Council, Fight for Sight and the Skin Cancer Research Fund.