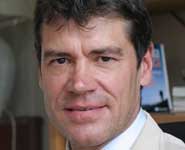 Professor Michael Perryman, Visiting Fellow in the School of Physics, is to receive the European Astronomical Society’s Tycho Brahe Prize.

Professor Michael Perryman, Visiting Fellow in the School of Physics, is to receive the European Astronomical Society’s (EAS) Tycho Brahe Prize, which recognises ‘the development or exploitation of European instruments, or major discoveries based largely on such instruments’.

Professor Perryman was the Mission Scientist and the Mission Manager (during the operational phase) of Hipparcos, a major space astrometry mission run by the European Space Agency (ESA) from 1989 to 1993.

Astrometry is concerned with measuring the positions and velocities of stars, and the Hipparcos mission succeeded in measuring more than 100,000 stars with high precision. The results are of fundamental importance to our understanding of, for example, how the Milky Way evolved over time.

The ESA announcement states: ‘In these roles [Professor Perryman] untiringly led the mission through many difficulties to its ultimate success. His understanding of the astrophysics, of the physics and technology involved in the satellite and its instruments as well as his intelligence of human relations contributed to a major extent to the success of the mission.’