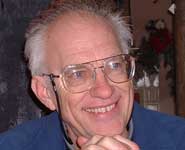 With sadness I report that Dr John Alcock passed away on 26 April 2011 following a long illness.

John’s research activities in the 1960s and ‘70s were in the theory of pion-nucleon scattering; he collaborated closely with his Bristol colleague, Noel Cottingham. Visits to Carnegie-Mellon in Pittsburg and to Lawrence Berkeley Laboratories, University of California enabled John to gain expertise in scientific computing. In 1978 he took on academic responsibility for computing in Bristol Physics, managed the DEC VAX machine, and subsequently played a key role in several University computer committees making strategic decisions about new machines and computing facilities.

From 1985 John was responsible for all finance administration in Physics. His experience and his knowledge of financial regulations, coupled with his forthright manner, led John to interesting interactions with several experts in the University’s Finance Office; some were known to hide when they saw John crossing the road from Physics to Senate House.

John was appointed Deputy Head of Department in 1990, a post he held with distinction until his retirement in 2007. He did attempt to get away a little earlier; he worked part-time – well, he was paid part-time – for three final years.

Four successive Heads of Department (Professors Enderby, Springford, Steeds and Evans) are indebted to John for his unstinting support. We appreciated enormously his wise advice on a vast range of difficult academic and practical matters.

Throughout most of his career John carried a full teaching load, lecturing with verve and enthusiasm over a full gamut of topics. He served effectively on numerous committees, at departmental and faculty level, concerned with teaching assessment. John’s sharp eye for detail along with his ability to take a pragmatic stance when required, were valued by all who worked with him.

His contributions to the University extended well beyond the portals of Physics. He served on Senate, Council and various Policy Boards. Once he told me that he was on just as many committees as the then Vice-Chancellor. For seven years John was Secretary of the Senior Common Room and honorary Treasurer for many more years. He was undoubtedly one of the pillars of the SCR. Members of the Walking Group will remember John’s bright green Rohan trousers, which served as a beacon to other, less rapid, walkers.

John was also an accomplished archer; he served as a director of the Council of the Grand National Archery Society and qualified as a County Coach.

John Alcock was an incredibly unselfish academic. He cared about the students and about the success of the Department – not his own aggrandisement. He took on jobs that were not easy, which did not bring prestige but were nevertheless very important for the effective functioning of the academic enterprise. He did these with aplomb. In his CV I found the following personal statement from 2003:

'I see my position as relieving my colleagues of as much of the administrative chore as I possibly can, particularly where academic judgement is required, and expediting as well as I am able the necessities of managing a major department like Physics, and making sure that everything which has to be done, is done completely, effectively, and to time.'

The statement speaks much about the man. Few have shown greater commitment to the Department – and to the University.

Dr Bill Boyd, a former Dean of Science, forwarded these words about John:

'The University, Faculty and Department owe John a great deal. I shall remember him, with respect and affection, for his gritty integrity and for his determination to uphold high personal and intellectual standards within the academic community of which he was part, without either fear of, or favour towards, Heads of Department, Deans or Vice-Chancellors. We shall miss him.'

John’s wife Annabel, his daughters Annette and Ellie, and two grandchildren survive him.