New insight into how 'tidying up' enzymes work 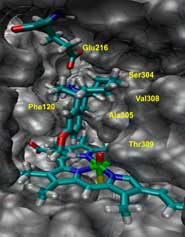 Binding orientation of dextromethorphan in the active site of P450 2D6 as derived from QM/MM minimization Julianna Oláh, Adrian Mulholland and Jeremy Harvey

A new discovery about how molecules are broken down by the body, which will help pharmaceutical chemists design better drugs, has been made by researchers at the University of Bristol.

Working with Professor Jeremy Harvey and Professor Adrian Mulholland of Bristol’s School of Chemistry, Dr Julianna Olah, an EU Marie Curie Fellow in Bristol at the time, studied a class of enzymes – cytochromes P450 – which play an important role in removing drug molecules from the body.

When a tablet of medicine is taken, the active molecules get absorbed into the bloodstream through the gut and make their way around the body, including to the cells in which they are intended to act; however, it’s important they don’t stay in the body forever.  Enzymes (biological catalysts) help break them down to facilitate excretion.

The cytochromes P450 are a very important class of these ‘tidying up’ enzymes which have evolved to deal with all ‘foreign’ compounds that do not get broken down as part of normal metabolism (that is, any compounds which are not proteins, carbohydrates or lipids).

Mainly situated in the liver, the P450 enzymes help remove drug molecules by adding oxygen to them.  This process usually works smoothly, but for some molecules, it can lead to oxygenated variants that are toxic.  Other molecules are also able to interfere with the normal function of the P450 enzymes.

For these reasons, it is important to be able to understand how a given new molecule, considered for use as a medicine, will react with these enzymes.  The Bristol researchers aimed to provide this understanding by modeling the reaction mechanism for interaction between one specific drug (dextromethorphan, a component of some cough syrups) and one P450 variant.

Professor Jeremy Harvey said: “Our calculations showed that the outcome of the oxygen transfer process (that is, which part of dextromethorphan oxygen gets added to) is affected by three factors.

“The first is the way in which the molecule fits into the enzyme (‘docking’).  The second is the intrinsic ability of each part of the molecule to accept oxygen.  The third is how much each competing oxygen-delivery process is compatible with the shape of the enzyme pocket where the reaction occurs.

“While these first two factors were already known, the third was not.  This discovery can help pharmaceutical chemists design new drug molecules with a better understanding of how they will be broken down in the body.”

‘Understanding the determinants of selectivity in drug metabolism through modelling of dextromethorphan oxidation by cytochrome P450’ by Julianna Oláh, Adrian J. Mulholland and Jeremy N. Harvey in PNAS