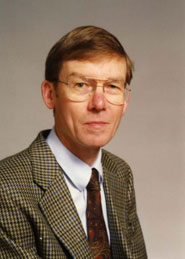 Michael Howarth, who was a member of the Library staff from 1972 to 2004, died at the end of February. David Hughes offers this tribute.

Michael was an exhibitioner at St Catherine’s College, Oxford, where he took second class honours in Modern Languages with distinction in colloquial French. He then spent five years as a schoolmaster, becoming Head of the French Department at Builth Secondary School in 1968, a post he held for one year before turning to a career in librarianship. Michael trained at the College of Librarianship, Wales, where one of his tutors described him as “virtually an ideal student who will be a credit to the profession”, before taking up a post at the University of York.

Michael came to Bristol as part of the, then, embryonic  team of subject librarians, with a well-established reputation for linguistic ability and a high level of bibliographic expertise. His areas of specialism included French, German, Italian and Spanish. He familiarised himself with Portuguese and Catalan and later devoted three weeks to studying Russian, after which he felt “equal to any Russian text with the help of a dictionary”. For Michael, mastery of a language was the only level of competence worth having. On one occasion he was clearly but quietly proud of the fact that the Library’s principal Paris book dealer had complimented him on being by far the most fluent of his English customers.

Later, when an opportunity arose for him to extend his range of languages to include the classics, Michael brushed up his Latin and set about learning Greek from scratch at an awesome pace. He devoted many holidays to improving his linguistic knowledge through travel or attending courses. After one holiday in Honfleur he was delighted to have improved his knowledge of vocabulary relating to fruits de mer. He reserved a special affection for the language of his native Cornwall and he had been especially pleased to be elected a Bard of the Cornish Gorsedd.

His enthusiasm and his professionalism set standards for Bristol’s subject librarians and he helped to define the role of the newly established posts. He particularly recognised the need for thoroughness and accuracy in library work and he carried out his duties with meticulous care. He was, perhaps, conscientious to a fault. He particularly relished the challenge of penetrating into arcane bibliographic enquiries on behalf of readers and scholars, took delight in solving problems, and earned the gratitude of many academic colleagues for his willingness to share his expertise.

In addition to his linguistic ability Michael possessed unrivalled familiarity with reference works and bibliographies and his training sessions for colleagues were always well attended and appreciated. It was typical of his generous nature that he wanted to share his knowledge. His initial training as a teacher proved to be a most valuable asset.

Following his retirement from the University Library, Michael took up an appointment in the Library of Exeter Cathedral, a role especially suited to his skills and interests. He took great pleasure in his surroundings there, both the collections and the ambiance, and in serving the readers.