What’s mine is virtually yours 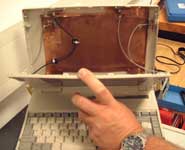 The problem of physically accommodating multiple antennas or multiple-input multiple-output (MIMO) technology in the latest consumer products is investigated in new research from the University of Bristol's Centre for Communications Research.

Applications on modern wireless devices make demands on data rate and connectivity far beyond anything experienced in the past. One way to meet these stringent requirements is to give the device multiple antennas or multiple-input multiple-output (MIMO) technology. The problem of physically accommodating these additional antennas in the latest consumer products is investigated in new research from the University of Bristol.

The study by academics in the field of antennas and propagation in the University‘s Centre for Communications Research (CCR) is published in the journal IEEE Transactions on Antennas and Propagation.

The researchers looked at what happens when, instead of having many antennas of their own, a user shares the antennas of a nearby device, to create a ‘virtual’ MIMO terminal. This technique is likely to enter service in 4G wireless technologies like LTE and WiMAX, but the researchers showed that very careful design is needed in such systems.

By measuring performances of such a system in a real-world city-centre environment, the researchers were able to characterise how likely these ‘virtual’ deployments were to actually make things better for the end user.

“But it is important to deploy this technology with additional ‘intelligence’ in the network to make the most of what it can offer.  Research looking at virtual MIMO in other environments and scenarios is ongoing within the CCR”.

Analysis of the data indicated that although the data capacity of the system was increased around 50 per cent of the time, in a significant number of cases virtual MIMO technology actually made things worse for at least one of the two users involved.

It was found that it is essential to consider the quality of the radio link between the users and the network access point before virtual MIMO can reliably be used ‘in the field’. The researchers propose metrics, which can be used to judge when to enable virtual MIMO instead of ‘classical’, non-cooperative methods.

It was established in 1987 as one of the first University Research Centres and its template for structure and operation across departmental and faculty boundaries has been adopted across the world by other leading research universities.

Research topics such as those described in this paper will be addressed by the newly EPSRC and industrially funded Centre for Doctoral Training in Communications, awarded to the University of Bristol.

Also, the recently announced European Cooperation in Science and Technology (COST) action on Cooperative Radio Communications for Green Smart Environments (IC1004) will consider such topics reporting on research from research institutions throughout Europe.

Professor Mark Beach is the UK National Delegate for this COST action.