A night at the museum with the Bristol Dinosaur 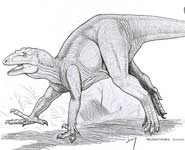 An artist's impression of the Bristol Dinosaur

People of all ages will have the opportunity to find out about Bristol’s very own dinosaur, the Thecodontosaurus, along with meeting experts to learn about Bristol University’s current scientific research on fossils and dinosaurs. Dino-nite! will take place on Wednesday 23 March at the Bristol Museum and Art Gallery on Queen’s Road, Bristol from 5 to 8 pm.

Dino-nite! has been organised by the Bristol Dinosaur Project, run by the University’s School of Earth Sciences, in partnership with the City Museum.  The event will take place on Wednesday 23 March at the Bristol Museum and Art Gallery on Queen’s Road, Bristol from 5 to 8 pm.

Members of the public will have the chance is see how a model dinosaur is made, handle real fossils and learn about the other dinosaurs and fossils on display in the museum.

Ed Drewitt, Learning Officer for the Bristol Dinosaur Project in the School of Earth Sciences, said: “Alongside current scientific research taking place at the University, Dino-nite! will enable local people to learn about one of the city’s most important, but least well known, residents.

“The remains of the Bristol Dinosaur are of great international significance to the scientific community, offering a rare chance for academics to further understand what our world was like 200 million years ago and to study this unique animal and its ancient environment.”

Since discovery of the University’s specimen at Tytherington Quarry in the 1970s, the fossilised remains of the Bristol Dinosaur have largely remained entombed within the rock.  A Heritage Lottery Fund, awarded to the University in 2009, will at last allow the dinosaur to be excavated and then displayed for all to see.

Thecodontosaurus antiquus is one of the most primitive dinosaurs in the world, lying at the very base of the dinosaur family tree. During the Triassic the kangaroo-sized, plant-eating species lived in herds on lushly vegetated islands around Bristol. The outlines of these islands can still be seen today in the shape of the land – Bristol’s famous Downs was one such island.

The first remains of the Bristol Dinosaur were discovered in 1834 at Durdham Down, Bristol, but were destroyed when the museum was hit in a WWII bombing raid.  The remains found at Tytherington Quarry are at the heart of the current three-year research project to excavate the dinosaur.

It is hoped, when the project is completed, the Bristol Dinosaur will be displayed at the City Museum.

Dino-nite! is a series of evenings dedicated to showcasing the Bristol Dinosaur Project. The event will include tours of the dinosaur gallery and hands on activities.

Dino-nite! will take place on Wednesday, 23 March and 20 April at the Bristol Museum and Art Gallery on Queen’s Road, Bristol from 5 to 8 pm. The evening is suitable for older children and adults, although the whole museum, which is ideal for families, will be open.

The event has been organised by the Bristol Dinosaur Project, run by the University of Bristol’s School of Earth Sciences, in partnership with the City Museum.