First female winner of UK’s Young Scientist of the Year 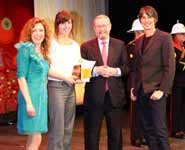 A University of Bristol veterinary student has been named the first female UK Young Scientist of the Year at this year’s National Science & Engineering competition.

Hannah Eastwood, a first-year undergraduate studying veterinary science and originally from Coleraine in Northern Ireland, was awarded the prestigious accolade at The Big Bang: UK Young Scientists’ & Engineers’ Fair and is the first woman to be awarded any senior title in the competition.

Her winning project explored how chromium can be removed from drinking water.  This enables tap water to be purified and reclaimed for the steel industry, where it is a valuable resource.

Hannah made a substance called Lepidocrocite, which is an iron oxide-hydroxide mineral.  She discovered its formation pathways after creating a control system to make the substance.

Hannah Eastwood, talking about her award, said: “I’m still in shock but so thrilled.  This is an unbelievable opportunity to be an ambassador for science and to inspire young people.”

Professor Brian Cox, one of the judges of the National Science & Engineering Competition, said: “I'm delighted to award Hannah the UK Young Scientist of the Year.  The judges were truly overwhelmed by her project and it’s wonderful to witness such enthusiasm and dedication for science.  It’s left me hugely excited about the future of science in the UK, with passionate young scientists such as Hannah at the helm.”

Professor Jo Price, Head of the School of Veterinary Sciences, added: “It is a great achievement for Hannah to win such a prestigious award.  We wish her every success in her degree and her ambassadorial work in encouraging more young people to study at university.”

The National Science & Engineering Competition is open to 11-18 year olds from across the UK.  Finalists showed off their projects at the Big Bang fair at the ExCeL centre in London last week [10-12 March], which marked the start of National Science and Engineering Week 2011.

About the National Science & Engineering Competition

The National Science & Engineering Competition 2011 was open to 11-18 year olds across the UK.

Finalists were invited to present their project at The Big Bang. Here they had their own exhibition stand amongst the big household names and were able to show-off all their hard work to journalists, prospective employers and universities - as well as the school groups and VIPs attending The Fair.

About The Big Bang: UK Young Scientists and Engineers Fair

The Big Bang: UK Young Scientists and Engineers Fair took place from 10-12 March 2011 at ICC London at ExCeL, celebrating and raising the profile of young people’s achievement in science and engineering and encourage more young people to take part in science, technology, engineering and maths initiatives with support from their parents and teachers. School groups were invited to visit the first two days of The Big Bang, which was also be open to the public on the Saturday. Young people are shown how science and engineering feature in everything they wear, eat and do. A number of apprentice, graduate and experienced engineers and scientists were also on hand to quiz and young people hand opportunity to discover a great career.

The Big Bang also kicks off National Science and Engineering Week 2011, which runs from 11-20 March.