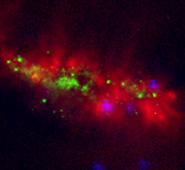 A new image of the interior of the famous starburst galaxy Messier 82 (M82) that reveals young star clusters as well as the sources of its superwind, has been produced by an international team of scientists, including physicists from the University of Bristol.

A new image of the interior of the famous starburst galaxy Messier 82 (M82) that reveals young star clusters as well as the sources of its superwind, has been produced by an international team of scientists, including physicists from the University of Bristol.

The ultra-sharp image, captured by the Subaru Telescope, fitted with COMICS (COoled Mid-Infrared Camera and Spectrometer), contributes to our understanding of this complex young galaxy by showing that M82’s galactic windstorms emanate from many sites rather than from a single cluster of stars.

The team was led by Dr Poshak Gandhi of JAXA, and included Professor Mark Birkinshaw and Professor Diana Worrall of the University of Bristol.

M82 is located close to the ladle of the Big Dipper in the constellation Ursa Major and, at about 11 million years away, is the nearest starburst galaxy to Earth.  The study of such galaxies enables astronomers to effectively peer back into our own galaxy’s past.

Like human beings, galaxies and the stars within them have a life cycle: they are born, grow and mature, and eventually die.  Starburst galaxies create new, young stars at a rate faster than the combined speed of many Milky-Way-like galaxies that are in a later phase of development.  The dusty ‘ash’ left over from successive generations of star formation in more mature galaxies blocks out much of the starlight, rendering it invisible to the human eye.  The bulk of the energy from starbursts emerges at longer wavelengths and therefore astronomers must turn to infrared rather than optical observations in order to understand the nature of these cosmic star factories.

The new view of M82 was produce at infrared wavelengths that are twenty times longer than those visible to the human eye.  It captures fine details of M82's interior, equivalent to seeing a small coin from a distance of six miles (ten kilometers) [figure 1 top].

The final result of the observations is a spectacular image showing the base of a dusty superwind and young star clusters with extraordinary detail, better than could be expected from space telescopes, which have smaller apertures that limit the extent to which they can resolve fine-scale structure.

Previous observations of M82 with infrared telescopes have found a very strong wind emanating from it – a 'superwind' that is composed of dusty gas and extends over many hundreds of thousands of light years [figure 1 middle and bottom].

This high-powered windstorm ejects material from the galaxy at a speed of about a half a million miles per hour sweeping it up from the central regions and depositing it far and wide over the galaxy and beyond.  The contents of this material are seeds for solar systems like our own and perhaps for life itself.  The dusty superwind glows brightly in the infrared, because billions of bright, newly-formed stars heat it up.

The Subaru image gives scientists an insight into the sources of the superwind.  It clearly shows that the superwind originates from multiple ejection sites spread over hundreds of light years rather than emanating from any single cluster of new stars.  The resolution of the image allows scientists to see such details as individual 'pillars' of fast-moving gas as well as a structure resembling the surface of a 'bubble' about 450 light years wide.

COMICS has detectors particularly adept at indicating the presence of warm dust which it found was more than 100 degrees hotter than the bulk of material filling the rest of the galaxy.  The widespread continuous flow of energy from young stars into the galactic expanse keeps the dust hot.

Further insights from the Subaru mid-infrared image emerge by combining it with the Hubble Space Telescope's near-infrared image and the Chandra X-ray Observatory's X-ray data.  Their integration produces a beautiful mosaic [figure 2] that provides the first opportunity to isolate M82's infrared properties.  Supported by these data, scientists can study the broad spectrum of radiation of different kinds of objects spread over the galaxy's plane, including supernovae, star clusters and black holes.

Many questions remain.  How many more stars does the galaxy contain?  Interestingly, the infrared radiation which maps out warm gas and dust appears in regions without stars meaning that many more stars are likely to be hidden behind the dust.

Another exciting question to be answered is whether or not M82 hosts an actively growing supermassive black hole.  Detailed analysis of the new infrared data combined with X-rays does not find any such object.  However all large galaxies could well contain these monsters, which are known to grow and evolve in conjunction with stars.  M82 may be no exception and the search for its big black hole will continue.

Professor Birkinshaw said: "Extreme galaxies like M82 show the extreme properties of nature most clearly - in this case vigorous disruption of the gas in a galaxy by an epidemic of the formation of young stars. While M82 has been famous for this for years, it's wonderful to have a sharper picture of what's happening in the middle of the galaxy, and to see details of the chimneys and bubbles formed by heated gas and dust."