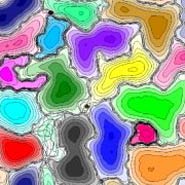 A computer simulated representation of territoriality, where the colours represent the region where different animals roam. Each colour represents a different animal; the darker the colour the more often an animal has visited that location. Jonathan Potts

A new study into the exclusion tactics adopted by urban foxes suggests that the transient nature of animal territory is a result of a complex system of individual-level interactions.

The size of an animal’s territory is ultimately dependent on how long it can exert its control before intruders cross the boundaries into its space. The precise nature of such changeable territorial boundaries is revealed in a new study which offers fresh insights from the combined perspectives of biological sciences, mathematics and engineering.

Researchers from the University of Bristol used thirty years of data regarding the movements of the urban red fox to construct and verify a mathematical model on which their analysis was based.  A trade-off between two factors emerged as key determinants of territoriality – the time necessary for an animal to move between its own boundaries and the time span during which the fox could maintain its scent trail within that territory.

In 1994, when a disease called sarcoptic mange infected and killed most of Bristol's fox population, Professor Stephen Harris noticed that as the animals on one territory died, the neighbouring animals were able to move in and take over within a matter of three or four days. He assumed that this was because the scent marks of the original fox population were no longer fresh.

This new study, published in PLoS Computational Biology, shows how important it is for a fox to renew its scent marks frequently, further demonstrating the transient nature of populations, and disputing previously held beliefs that scent marks serve as a long-term message and indicator of territorial boundaries.

Lead author Dr Luca Giuggioli, a Complexity Sciences lecturer in the Department of Engineering Mathematics and the School of Biological Sciences, said: “Understanding how organisms move and interact has implications far beyond behavioural ecology. This model may, for instance, shed light on the processes responsible for the formation of territorial boundaries in early human hunter-gatherer societies, and eventually help predict how the size of modern day countries will evolve.”

Co-author Jonathan Potts added: “Our theoretical framework might also inspire designs in collective robotics. From very simple rules, the individuals divide space into territories, and if one individual should fail, its territory is taken over. Building an army of territorial robots that move according to these rules could be an efficient and robust way to deal with dangerous tasks over a wide spatial area, such as clearing minefields.”

Dr Giuggioli added: “This study is one classic example in which answering a biological question with the help of Complexity Sciences tools provides far reaching results, challenging long-held preconceptions and opening up the possibilities in areas of science unrelated to where the questions originated.”