A stem cell bandage for your knee 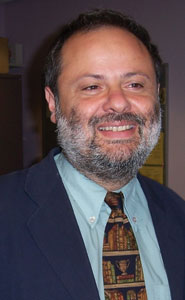 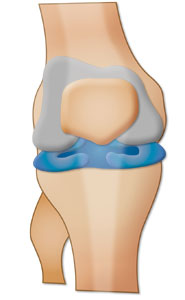 Diagram of the knee joint showing the meniscal cartilage

Labelled cells showing they have migrated into the cartilage

Back in December 2003, re:search reported on the work being done by Anthony Hollander, Professor of Rheumatology and Tissue Engineering in the Department of Cellular and Molecular Medicine, who was pioneering regenerative medicine techniques in order to replace cartilage in the knees of osteoarthritis sufferers. Five years later, re:search reviews the remarkable developments that have occurred in that time.

Building on his previous work, Hollander and his team, which included Dr Wael Kafienah and Dr John Tarlton, announced in 2005 they had, for the first time ever, successfully grown human cartilage from a patient’s own bone marrow stem cells. It took just over a month to grow the cells into a half-inch length of cartilage and tests showed that the laboratory-grown cartilage was of a higher quality than any previous attempts at tissue engineering. Now the challenge was how to implant the engineered cartilage into the knee and get it to integrate with the surrounding tissue. The idea was to use cells to drive integration of one tissue with another, with the long-term aim of developing a way of fixing and integrating engineered cartilage with natural cartilage, literally ‘knitting’ the two surfaces together with cells.

Once funding was in place the team pursued this challenge, but it was soon discovered that if cells were left to their own devices, they tended to clump together forming bridges between the two surfaces, but leaving gaps between the bridges. “We had to figure out how to stop these cells clumping,” says Hollander. “What we needed to do was keep cells between the two surfaces long enough for them to migrate from one side to the other, but not long enough to form new cartilage – I call it space removal.” What was needed was some kind of material that could be seeded with cells on both sides so they could be delivered to each of the two surfaces. It took quite a bit of time to find the best material for this, but once it was identified, the technique worked well very quickly. Using fluorescent labelling, cells could be seen migrating out of the cell ‘bandage’ and into the surrounding tissue where they soon became integrated. Problem solved.

Hollander and his team announced in 2005 they had, for the first time ever, grown human cartilage from a patient's own bone marrow stem cells

Having been so successful, the next step was to think about how this procedure could best be exploited. Although the technique had been developed for implanting engineered cartilage, the team soon realised that there was another really important clinical challenge for which this could be a perfect solution.

Many people aged between 20 and 50 who are active in sport suddenly get knee pain, go to an orthopaedic surgeon and are told they have a torn cartilage. In fact, what this usually means is that there is a tear in the meniscal cartilage – not the white shiny cartilage at the ends of your bones that Hollander usually works on, but the cushion between the two bones of the knee joint that is chemically and structurally slightly different from normal cartilage. Blood vessels around the edge of the cushion provide a supply of blood to the meniscus, and when a tear occurs in that area it can be repaired by sewing it together. However, most tears occur in what is called the white zone – the avascular zone – where there is no blood supply. These tears can be sutured together and the pain relieved for a short time, but when the suture falls out, it is back to square one. Essentially, these tears do not heal, so surgeons routinely perform a partial meniscectomy, removing the damaged part of the meniscus. Unfortunately, in at least 50 per cent of cases, patients go on to develop premature osteoarthritis in the damaged knee, often at an age when they are too young to have joint replacement. It is a significant problem for which there is currently no treatment.

Recognising that there was an unmet clinical need in repairing torn meniscal cartilage, Hollander and the team reasoned “that if we could get our cell bandage into the tear and suture up around it, that would promote healing and we wouldn’t have to cut out the damaged tissue”. They first filed a patent and then, with some early stage funding from the University, explored the idea of meniscal repair in vitro. Despite the results looking very promising, trying to raise money for the next stage took an inordinate amount of time. At last it all came together with a mixture of funds: a Wellcome Trust University Translation Award, designed to assist universities advance ideas with commercial promise in the biomedical area; a grant from the Research Council Technology Strategy Board, intended to support the commercialisation of research; and private funding from investors. In December 2007, Azellon was registered with Companies House.

A pre-clinical model is now under way and the team intend to start a human clinical trial in a year’s time. Hollander, now Azellon’s Scientific Director, jokes, “So at the moment we are a spin-out company that has no product and nothing to sell, but if the clinical trial goes well then value will be added very quickly”. Indeed it will. And he doesn’t intend to stop there: tendon, ligament and possibly muscle repairs are already being considered, as well as non-union bone fractures which are not healing, a very serious issue that can lead to loss of the limb. The future looks very bright, both for Azellon and the long-suffering patients these exciting new techniques will be able to treat.