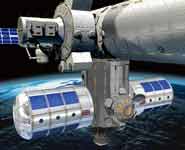 An artist's impression of the Habitation Extension Module (HEM) SimComm/Ducros

UK engineers and scientists - with the support of the British Interplanetary Society - are urging the UK government to fire the public’s imagination and catch the vision for future space exploration by joining the International Space Station (ISS) programme.

UK engineers and scientists - with the support of the British Interplanetary Society - are urging the UK government to fire the public’s imagination and catch the vision for future space exploration by joining the International Space Station (ISS) programme.

Their plan is for Britain to design, build and launch two modules to improve the everyday living conditions for astronauts at the Space Station. The study was conducted as part of a wider debate on what options are open for British involvement in human spaceflight

The proposal for the module, together with how the UK should be involved in future space exploration, is published in the latest issue of Spaceflight magazine, the British Interplanetary Society’s monthly space publication.  The author of the article is Mark Hempsell of Bristol University’s Department of Aerospace Engineering.

Despite being the world’s fifth largest economy, the UK currently has no manned space presence or interest in human space industry activities.

Mark Hempsell, Senior Lecturer in Astronautics, said: " As well as inspiring both the public and a new generation of young people. This proposal shows what Britain could still achieve at a relatively modest cost together with raising the UK's profile in the space-faring community around the world.

"It would allow UK scientists to use the Space Station for experiments, pave the way for British astronauts, and bring significant development and investment to the country's industry."

Current UK options under consideration are limited and would not allow the development of the full potential of the UK science or engineering communities.

"Such low-scale programmes are not a good basis for later participation in any international human lunar and Martian programmes because they have no engineering contribution," added Mark Hempsell.

The design study illustrates that the many requirements for a late, but full, entry into the ISS programme can be met by a single system and is still a possible option for Britain.

The two HEM modules would attach to two berthing ports on the Node 3 module of the Space Station, which contains the living quarters to enable a permanent crew of six people to live at the station. The HEM modules would add many of the living features that were originally intended for the ISS but are not in the current design including a communal area for eating, meeting and socialising where there could be teleconferences with Earth.

Two HEM modules would extend Node 3 and add around 100 m3 to the Space Station’s living areas.

The total cost of developing building and launching - on a Russian Souyuz/Fregat rocket - the two HEMs would be £530 million, spread over five or six years to 2015.

"It does now seem to have dawned on decision makers that the earlier exclusion of the UK from manned spaceflight in general and the ISS in particular was not in the national interest - at least from the science and motivational aspects," said Mark Hempsell.

“Eventually it may also dawn on them that the damage to the aerospace industrial base is also severely detrimental. The HEM study shows it is still possible to rectify this damage as well."

The London-based British Interplanetary Society has an international membership of several thousand and was formed in 1933 to promote the exploration and utilisation of space. In the 1930s, the BIS came up with plans for a manned lunar spacecraft, three decades before Apollo. In the late 1970s, it prepared a detailed design for a robot star-probe, Project Daedalus, to explore the system of Barnard's Star. It publishes the monthly magazine Spaceflight and a technical periodical Journal of the British Interplanetary Society.
Please contact Joanne Fryer for further information.