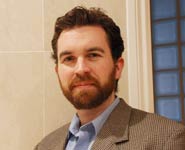 Research looking at the field of quantum metrology in which quantum mechanics is used to obtain highly precise measurements has been named at No 15 in Scientific American’s Top 50 outstanding technological leaderships of 2006-2007.

Research looking at the field of quantum metrology in which quantum mechanics is used to obtain highly precise measurements has been named at No 15 in Scientific American’s Top 50 outstanding technological leaderships of 2006-2007.  The work was carried out by an international team of scientists, including Dr Jeremy O’Brien of Bristol University.

The research has allowed physicists at Bristol University and Hokkaido University, Japan, to almost double the precision of measurement when using photons to gauge distances.

The scientists have built on previous work that uses photons “entangled” in the same quantum superposition of states. The team directed two photonic pairs into an interferometer—an instrument that creates a circular beam path with mirrors in which light waves interfere with one another. Each photon splits, taking separate paths simultaneously. Four photons in an entangled state circulate around the interferometer in one direction, and another quadruplet traverses the loop in the other. The interference produced by the countercirculating photons reveals tiny differences in how far each quadruplet has travelled.

The same quantum tricks could one day be used to lithographically write features, on computer chips for example, much smaller than the wavelength of light.

Dr O’Brien, Reader in Research at the Centre for Quantum Photonics in the Department of Physics and the Department of Electrical & Electronic Engineering, and the only British member of an otherwise all-Japanese team, said: “We are delighted to have received the award.

“Our research has demonstrated a way to almost double measurement precision by using photons of light with which to gauge distances.

“The precision of such a measurement depends on the wavelength of the light used. By using a group of four-photons, the set behaves as if it had a shorter wavelength than a single photon. This is rather like using a ruler with spacing four times as fine.”

The results of the project were published last year in the international journal Science.