Why it pays to be choosy 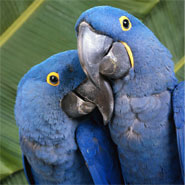 Given that cooperative individuals can often be exploited, it is not immediately clear why such behaviour has evolved. A novel solution to this problem demonstrates that when individuals in a population are choosy about their partners, cooperativeness is rewarded and tends to increase.

Nature paper: The co-evolution of choosiness and cooperation

Cooperative behaviour is common in many species, including humans. Given that cooperative individuals can often be exploited, it is not immediately clear why such behaviour has evolved.

A novel solution to this problem has been proposed by scientists at the University of Bristol and is published today in Nature.

Professor John McNamara and colleagues demonstrate that when individuals in a population are choosy about their partners, cooperativeness is rewarded and tends to increase.

Professor McNamara explained: “The problem is that the process of natural selection tends to produce individuals that do the best for themselves. So why has a behaviour evolved that appears to benefit others at a cost to the individual concerned?

“In our model, an individual’s level of choosiness determines the level of cooperation demanded of its partner. If the current partner is not cooperative enough the individual stops interacting with this partner and seeks a better partner, even though finding a new partner incurs costs.”

So when is it worth leaving the current partner and seeking a more cooperative one? Two components are necessary for this to be beneficial:

If these conditions are met, natural selection will lead to a certain degree of choosiness evolving. And once this happens, an individual that is not cooperative will be discarded by its partner and must pay the cost of finding another partner.

Thus when there is choosiness, cooperativeness is rewarded and tends to increase. In this way the level of cooperation and the degree of choosiness increase together over time, and cooperation can evolve from an initially uncooperative population.

This research was funded by the Biotechnology and Biological Sciences Research Council (BBSRC) and the Deutsche Forschungsgemeinschaft. Professor Nigel Brown, Director of Science and Technology at BBSRC, commented: “This is one of a number of fields where modelling studies are advancing biological science more rapidly than experiment alone can achieve.”

In a computational model, the team considered a large population where, in each of a discrete series of time steps, pairs of individuals engage in a ‘game’ in which each individual does best by being uncooperative and letting its partner put in the hard work.

As this model does not require complex procedures such as negotiation, it could be relevant to a wide range of species.