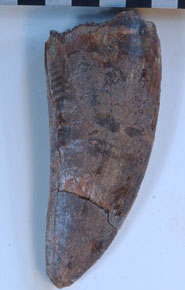 The tooth of Carcharodontosaurus iguidensis. Each box in the scale is 1 cm. Simon Powell

The remains of one of the largest meat-eating dinosaurs ever found have recently been recognized as representing a new species by a student working at the University of Bristol.

The remains of one of the largest meat-eating dinosaurs ever found have recently been recognized as representing a new species by a student working at the University of Bristol.

The new species is one of the largest carnivorous dinosaurs ever to have lived.  Carcharodontosaurus iguidensis was probably 13-14 metres long, making it taller than a double-decker bus. It had a skull about 1.75 metres long and its teeth were the size of bananas.

The new fossils come from a different part of Africa, the Republic of Niger, and show a number of differences from the Moroccan material, allowing Brusatte to name it as a new species: Carcharodontosaurus iguidensis.

The fossils include several pieces of the skull – parts of the snout, lower jaw, and braincase – as well as part of the neck. They are described in the current issue of the Journal of Vertebrate Paleontology, published today.

This new discovery shows that a number of huge theropods – bipedal, carnivorous dinosaurs – were living in Africa 95 million years ago. Two other mega carnivores are known to have inhabited the same Saharan ecosystem at this time: Spinosaurus – a sail-backed creature which may have grown up to 18 metres in length, and the slightly smaller Abelisaurid theropods that were characterized by stocky hind limbs and extensive ornamentation of the skull bones. They only grew to about nine metres high.

Brusatte added: “The Cretaceous world of 95 million years ago was a time of some of the highest sea levels and warmest climates in Earth history.  It seems that shallow seas divided Morocco and Niger, promoting evolutionary separation of the species living in the two regions.

“This has implications for the world today in which temperatures and sea level are rising.  It is precisely by studying these sorts of ecosystems that we can hope to understand how our modern world may change.”

The fossils were found in Niger in 1997 on an expedition led by Paul Sereno from the University of Chicago, a co-author on the paper.

The paper: A new species of Carcharodontosaurus (dinosauria: theropoda) from the Cenomanian of Niger and a revision of the genus. By Stephen L. Brusatte and Paul C. Sereno. Journal of Vertebrate Paleontology 27(4), December 2007.
Please contact Cherry Lewis for further information.