Reprogramming of immune cells shown to fight off melanoma 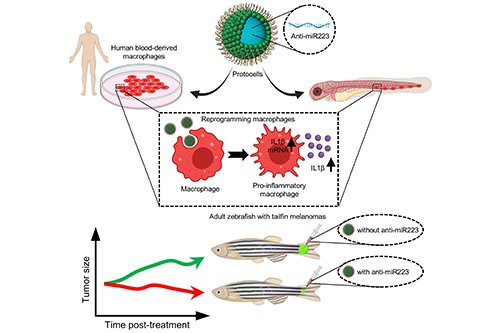 A new way of reprogramming our immune cells to shrink or kill off cancer cells has been shown to work in the otherwise hard to treat and devastating skin cancer, melanoma. The University of Bristol-led discovery, published in Advanced Science today [31 October], demonstrates a new way to clear early stage pre-cancerous and even late-stage tumour cells.

Using miniature artificial capsules called protocells designed to deploy reprogramming cargoes that are taken up by inflammatory cells (white blood cells), the scientists show they were able to transform these cells into a state that makes them more effective at slowing down the growth and killing of melanoma cells. They showed that this was possible for both animal and human immune cells.

The study is the first to test the capacity of a protocell to deliver cargoes for reprogramming immune cells and offers a promising novel target for the development of cancer immunotherapies.

Paul Martin, Professor of Cell Biology in the School of Biochemistry at the University of Bristol and one of the study's lead authors explained what happens when our immune system comes into contact with cancer cells: "Our immune cells have a surveillance capacity which enables them to detect pre-cancerous cells arising at any tissue site in the body. However, when immune cells encounter cancer cells they are often subverted by the cancer cells and instead tend to nourish them and encourage cancer progression. We wanted to test whether it might be possible to reprogramme our immune system to kill these cells rather than nurture them."

First, the team tested the proof of concept in zebrafish larvae which are used due to their translucency, allowing researchers to watch inflammatory immune cells interact with cancer cells in ways not possible in our own tissues.

Protocells loaded with anti-miR223 molecules that bind to and interfere with signalling machinery in the inflammatory immune cells and work by effectively prolonging their pro-inflammatory state, were shown to drive altered immune cell-cancer cell interactions, slowing the growth of cancerous cells and driving increased tumour cell death in the larvae.

To find out whether this approach might be upscaled as a feasible therapeutic strategy for shrinking larger, more established, and growing cancers, the experiment was repeated in adult fish with tailfin melanomas, showing this approach significantly inhibited melanoma cell growth.

To fully investigate the feasibility of using protocells to deliver 'reprogramming' anti-miR223 cargoes in humans, the experiment was conducted again using an in vitro assay with primary human immune cells from the Toye lab, also in Bristol’s School of Biochemistry. Results from this experiment demonstrated that the protocells were able to effectively deliver and reprogramme human immune cells toward a more persistent pro-inflammatory and potentially anti-cancer state.

Professor Stephen Mann from Bristol's School of Chemistry and the Max Planck Bristol Centre for Minimal Biology added: "Our results highlight the therapeutic benefits of harnessing host immunity to eradicate cancers and demonstrate the feasibility of using protocells to deliver cargoes for reprogramming innate immune cells. While our experiments in zebrafish are early pre-clinical studies, our results indicate that the same is possible for human immune cells, at least in vitro, and can be similarly reprogrammed to supress cancer growth."

About the European Research Council (ERC)

The ERC, set up by the European Union in 2007, is the premier European funding organisation for excellent frontier research. It funds creative researchers of any nationality and age, to run projects based across Europe. The ERC offers four core grant schemes: Starting Grants, Consolidator Grants, Advanced Grants and Synergy Grants. With its additional Proof of Concept Grant scheme, the ERC helps grantees to bridge the gap between their pioneering research and early phases of its commercialisation. The ERC is led by an independent governing body, the Scientific Council. Since 1 November 2021, Maria Leptin is the new President of the ERC. The overall ERC budget from 2021 to 2027 is more than €16 billion, as part of the Horizon Europe programme, under the responsibility of the European Commissioner for Innovation, Research, Culture, Education and Youth, Mariya Gabriel.

The Elizabeth Blackwell Institute drives innovation in research to improve health for all. It nurtures interdisciplinary research to address the complex health challenges facing us today.

The institute focuses on: