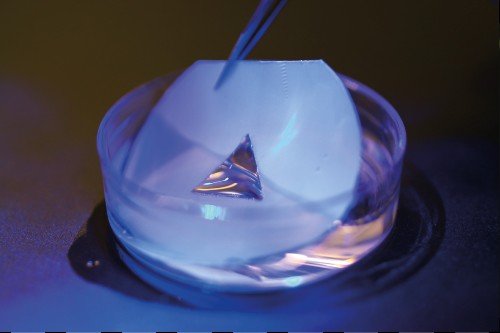 Photograph of a floating mould containing a protocellular material in the shape of a triangle with 1.0 cm sides being lifted from a Petri dish. Dr Pierangelo Gobbo and Dr Agostino Galanti 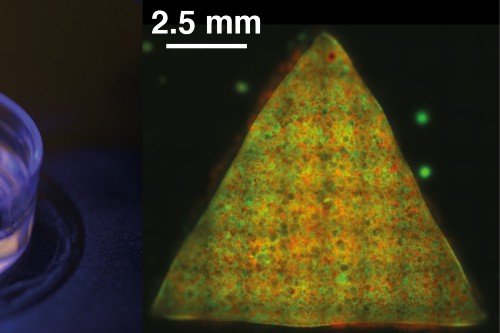 Scientists have created new artificial tissues that mimic some of the complex characteristics and abilities of living tissues, paving the way towards unprecedented advances in medicine, soft-robotics, and micro-engineering.

The University of Bristol-led breakthrough, published in Advanced Materials, reports the first way to produce centimetre-sized artificial tissues of any shape and with complex internal structures.

A team, led by Dr Pierangelo Gobbo from the university’s School of Chemistry, developed the new technique and used it to assemble millions of sticky synthetic cells, called “protocells”, into artificial tissues capable of communicating with each other as well as with their external environment. Previously protocells have been worked with individually, but the scientists found that when the cells were combined in a group to form protocellular materials they interacted together and showed advanced capabilities.

The team then specifically programmed the behaviour of the protocells comprising the material so that when waves of chemicals were sent into the environment, the protocells responded together and it was possible to extract important physical and chemical information from their collective reaction. This could, for instance, lead to a new method to study how a drug moves and distributes inside living tissues.

The team indicate in future it could be possible to graft protocellular materials onto organs to provide targeted therapies, or to use these artificial tissues as organoids to closely replicate in vivo environments for drug screenings and reducing animal testing. The tissues could also be used to assemble the next generation of soft robots fuelled by chemicals available in the environment.

Lead author Dr Agostino Galanti said: “These exciting breakthroughs take synthetic cells to the next level, heralding important new potential in a wide range of industries. Our protocellular materials are robust, stable in water and are also capable of combining the special attributes of individual protocells with the new enhanced capabilities they take on when combined together in group formations.”

Dr Pierangelo Gobbo, Vice-Chancellor’s Fellow at the University of Bristol and Principal Investigator of the project, added: “The controlled assembly of protocells into centimetre-sized protocellular materials endowed with emerging bio-sensing capabilities is unprecedented and represents an important milestone towards the construction of fully autonomous and adaptive artificial tissues. Our next goal is to advance the biochemical capabilities and levels of autonomy of our protocellular materials to target important applications in tissue engineering, personalised therapy, pharmacokinetics, micro-bioreactor technologies, and soft robotics.”

The study was funded by the University of Bristol Vice-Chancellor’s Fellowship Scheme and the UK’s Engineering and Physical Sciences Research Council (EPSRC).

‘A Floating Mold Technique for the Programmed Assembly of Protocells into Protocellular Materials Capable of Non‐Equilibrium Biochemical Sensing’ by P. Gobbo et al in Advanced Materials.